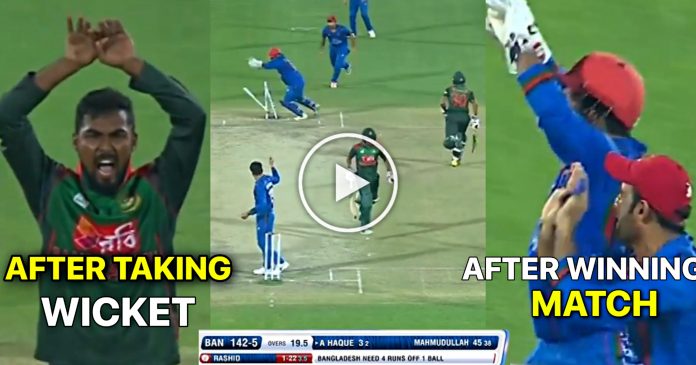 They say cricket is a funny game. A gentle man’s game. A game without any physical contact between players.

However, sometimes the players lose their temper on a cricket field. They are indulged in activities which does no justice to the claim that Cricket is a gentle man’s game. The sledgings, taunts or the imitations of the opposition players by opposite teams add fuel to the fire. In the heat of the moment, things sometimes get out of control. It comes as an entertainment for the spectators, but not so much for the players.

In this article, we will go through some of these incidents in which opposition players took it on personal level instead of being professional.

This series is famous for the advent of Nagin dance. The Bangladesh players were involved in a lot of Nagin Dance celebrations. Nagin dance was a kind of dance in which the players used to fold their hand like head of a snake and would move it like a snake does. They used to do it after taking any wicket of Afghan players!

This particular act irked the Afghani players like no other. Things got out of hand in the third game of the series. Additionally, Afghanistan had already won the series in the first two matches and were looking for a whitewash.

In the final game, Afghanistan batted first and scored 145-6. The same script was repeated again. After every Afghan wicket, there was a Nagin dance celebration by Bangladeshi players.

Bangladesh in reply, started their innings on a sombre note. They lost their 4 wickets at the score of 53. The lower middle order dragged Bangladesh to the score of 138-4 in 19 overs. Total 9 runs were required in the final over for a Bangladeshi victory.

Mushfiqur Rahim was batting while Rashid Khan was bowling. The first 5 balls brought only 5 runs. On the last ball of the game, 4 runs were required to win. Rashid delivered the ball to the batsman A Haque who smacked the ball to long on. However, the fielder at long on did a fabulous effort as he dived to stop the ball. The other fielder than gathered the ball and threw the ball to Afghan keeper. Meanwhile, the two Bangladeshi players were running to at least take 3, if not 4 which would tie the game.

But, the quick throw from the Afghan fielder found the batsmen short as the non striker was run out going for the third run. This victory by Afghanistan gave rise to huge celebrations by the Afghan team. Almost all of them burst into Nagin celebrations where they mocked the Bangladeshi celebrations by imitating them!

You can watch the highlights of this match here -:

This match is of battle and revenge of Virat Kohli, the Indian captain vs Kesrick Williams. The pre cursor to this battle was set in the West Indies when India had toured West Indies. In the last game of the limited overs leg, Williams the bowler dismissed Kohli and brought out the ‘Notebook’ celebration. This celebration was about taking an imaginary paper from the pocket and then ticking a few names on it, in an imaginary way. It was a unique thing to do.

So when, West Indies toured India a few months later, Kohli was facing Williams in the final T20 game. India was going in for the victory when Virat decided to have some fun. He hit a four off Williams and decided to do a Notebook celebration. he too brought out an imaginary note book and then ticked a few names like Williams used to do it.

it was funny and entertaining as well as a perfect revenge moment for Kohli!

Watch the video of it, here!

Gautam Gambhir Chooses Favorites For IPL 2020 Between MI and CSK