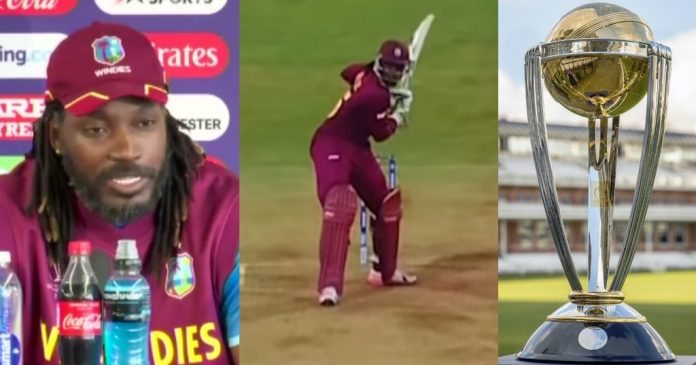 Chris Gayle, the 41 year old West Indian batsman is on a comeback trail to the national side. Having last played for West Indies back in 2019, Gayle had announced that he won’t play international cricket any more. But, Gayle is Gayle!

Having been out of reckoning of national team for more than year and a half, Gayle has come out with a target in his mind. The target which he has set in front of him is that he wants, to win another world T20 title. The title which will make him part of, three World T20 winning member.

West Indies have won the World T20 World cup in 2012, held in Sri Lanka for the first time. Gayle played a match winning innings of 75* off 41 balls as they defeated Australia, who were the favorites in the Semi Final to reach the final. In the final, they beat the host Sri Lanka to clinch the title.

The Caribbean team won their second T20 title in 2016, in India, where they beat hosts India in the semi final, and then defeated, England to clinch another title. Gayle was again instrumental in the W. Indies victory, as he hit a match turning 100* off just 48 balls in the league game vs England. In the final, the two teams met again, as West Indies won by 4 wickets to seal the deal.

After that, the World t20 was scheduled to held, in 2020 in Australia. However, it was cancelled owing to Corona wave, and now India will host the 2021 version of World t20.

Talking about performances of Chris Gayle, the 41 yr old left handed batsman from Jamaica, is widely regarded as the, greatest T20 batsman of all times. His insane ability to hit sixes, with minimal effort makes him the most feared batsman of all. He is one of the few players, who has played in virtually every cricket league and every T20 team wants to have piece of him.

In international cricket, Gayle has made, 1627 runs at an average of 32.5, with a strike rate of 143. He has hit 2 sixes per innings on average and is the quickest to hit 100 sixes, in international T20. The left hander has also hit two centuries.

However, its his range in league cricket, that has truly made him the best in T20. Playing in every league around the world, Gayle has represented more than 20 teams in these tournaments. His stats in these matches are truly mind boggling!

. He has scored 13691 runs which is the highest amongst all.

. His 22 centuries places him at the top in T20 cricket. The next batsman is in with 8 centuries!

By the stats, it is clear that when it comes to T20 cricket, no one comes even close to Chris Gayle. There is a light year difference between him and others. No wonder fans call him as the “Don Bradman of T20 cricket.”

He has been on the sidelines in last couple of years in cricket, due to his fitness issues, and age in excess of 40, but safe to say that he is still a force to reckon, with in T20 cricket.

And as Gayle has already given a warning that he wants to win another T20 title, teams should be better wary of him. A 10 minutes of Gayle Storm would be more than enough, to change the course of the match, as we have seen over the years in IPL and International cricket.

You can watch some of Gayle’s monster sixes in this video -:

Watch : Hardik Pandya wins hearts of millions of fans with this act