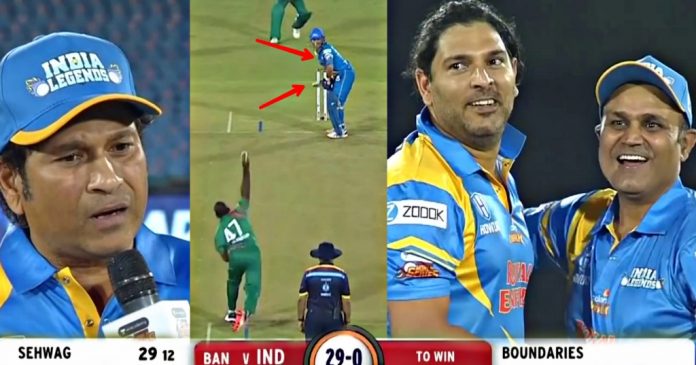 In an one sided encounter, India legends beat Bangladesh legends by 10 wickets. It was the inaugural game of the Road Safety League, played in Raipur.

Bangladesh legends batted first and were bundled out for 109 runs. They could not play for full 20 overs. Nazimuddin was the top scorer for Bangaldesh with 49 runs.

In reply, India legends made short work of the chase as the old warriors Sehwag and Sachin thrashed the Bangladeshi bowlers to all parts of the park. Again, Sehwag hit 19 runs of the opening over by Rafique.

From there on, it was just a matter of time. Sehwag kept on hitting boundaries to all the bowlers as he hit his 50 off just 20 balls. Sachin too made 33* off just 26 balls.

India cantered to victory in 11th over as both Sachin and Sehwag remained unbeaten.

In true Sehwag style, he hit a six to win the game for India legends. Sehwag was not out at 80* off just 35 balls.

Earlier Bangladesh had a good start to their innings when they added 59 runs without the loss of any wickets. The opener Nazimuddin was playing nicely and was ably supported by Javed Omar. For India, Irfan Pathan and Vinay Kumar started the bowling.

When Bangladesh started their innings, it appeared that they would score more than 140. However, things started to go downhill for Bangladeshi batsmen once Nazimuddin was dismissed by Yuvraj Singh.

After that, it was just a sorry tale of Bangladeshi batsmen surrendering their initiative to the Indian legends. Further, Mohammad Rafique, Nafees Iqbal and Hannan Sarkar all followed each other quickly to the pavilion. Consequently, the all rounders Abdur Razzak and Mohammad Sharif too could not do anything as they were dismissed for cheap scores.

As Bangladesh slipped from 59-0 to 91-7, it was just a matter of time for Bangladesh innings to get folded. The tailenders Rajin Saleh, Khaled Mahmud and Alamgir Kabir were all gone for single digit scores as Bangladesh were shot out for 109 runs.

For India, Vinay Kumar, Yuvraj Singh and Pragyan Ojha all picked up 2 wickets each. Manpreet Singh Gony and Yusuf Pathan took a wicket each.

Pragyan Ojha was the most economical bowler with figures of 4-0-12-2. Also, Irfan Pathan and Munaf Patel too bowled but could not pick up any wickets.

A target of 110 was never going to be tough for India. The way Sachin and Sehwag started to bat, even a target of 160 might not have been enough. Sehwag took 19 runs off the over in his true character on the left arm spinner of Mohammad Rafique.

In all Sehwag finished with figures off 80 runs in 35 balls. Additionally, it contained 10 fours and five sixes. Besides, Sehwag specially targeted Alamgir Kabir and Khaled Mahmud. Both of them combined to finish with sorry figures of 4.1-0-57-0.

Sachin Tendulkar was a lot more calm compared to Sehwag as he made 33* off 26 balls. Moreover, he hit five boundaries which reminded his fans of his glory days. Equally important, the square drive and flick was certainly the reminiscent of his former and playing days.

For his destructive innings, Virender Sehwag was adjudged the man of the match.

The next game of India legends is against England legends at the same ground.

Watch Jadhav hits a six on the last ball.