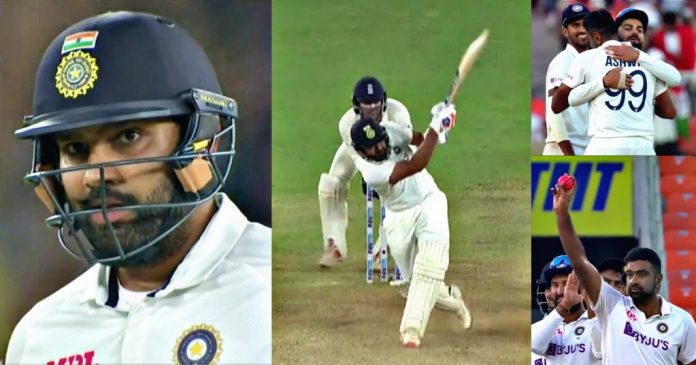 India won the third test of the ongoing test series by in great style by 10 wickets to take a 2-1 leading the four match series. This match will go down as one of the unique matches which finished inside just 2 days as both teams crumbled. This made sure the result is achieved in 5 sessions of a possible 15 sessions.

The victory also meant that now India has moved a step closer to playing the finals of the World test Championship. The finals will be played in Lords, England in the month of June.

New Zealand is already sitting comfortable in the final. If India wins this series vs England by any margin, then they will meet the Kiwis in the finals at Lords.

The Start of day 2

The day started at Indian first innings score of 99-3. The overnight batsmen Rohit Sharma and Ajinkya Rahane came to the crease to try and take a huge first innings lead. However, the English spinner Jack Leach had other ideas.

Leach dismissed Ajinkya Rahane when the Indian lead was just 2 runs. Rohit was the next man out by the same bowler as he was found plumb in front of the wicket. It became a procession from then on as wickets fell one after another to spinners.

The English skipper who is also a part time spin bowler came to bowl to exploit helpful conditions. He was spot on from ball 1 as he dismissed the swashbuckling batsman Rishabh Pant. From a score of 114-3, Indian team slipped to 117-6. From there on it, was just a matter of time before the innings came to a halt.

As expected, the lower order could not provide enough resistance. Joe Root finished with scarcely believable figures of 8-5. Soon, the Indian team folded for a meagre 145 runs. A lead of just 33 runs was almost a chance got wasted, but followed was spectacular!

England were looking to score maximum possible runs so that India could have to chase more runs in fourth innings which could have been difficult.

However, England’s innings started in the worst possible way as they lost 2 wickets of the first 3 balls. The half centurion from first innings, Zak Crawley was bowled first ball. It was followed by Jonny Bairstow who was cleaned up third ball.  Axar Patel, sent both of them back to pavilion.

The other Englishmen too could not adjust to the line and lengths. Both the Indian spinners proved to be unplayable. None of the batters looked comfortable while handling the tweakers except Joe Root.

Only three Englishmen could reach double digit players in front of Indian left and right arm spinners Ravi Ashwin and Axar Patel who were firing all cylinders. Ben Stokes was the highest scorer for England with a score of 25 runs.

For India, Axar Patel took his third successive five wicket haul in as many innings and also took a 10 wicket haul in this test. Overall he returned with match figures of 11 wickets for 70 runs.

The other spinner too had a special outing. Ravi Ashwin got to a special milestone of reaching 400 wickets in his 77th outing. He dismissed Jofra Archer in the second innings. Ashwin took 4 wickets for 48 runs and returned with match haul of 7 wickets for 74 runs. He also scored precious 17 runs in the first innings.

In face of all this, the hapless England team was shot out for a paltry 81 runs. This was also the lowest total by an English team against India. Also, this is the lowest ever match total of 193 runs which the England team managed.  None of the previous visiting team had made lower score than 193 runs across two innings in a test in India.

A target of 49 runs were never going to be enough for India. Both the openers Rohit and Gill managed to knock down the target quickly in just 7.4 overs as India registered a thumping 10 wickets win. Both the openers hit a six each. Rohit Sharma who looked the most assured batsmen on either side finished the game by hitting a six off Joe root.

Watch : Shocking reason due to which Pant was affected by COVID-19