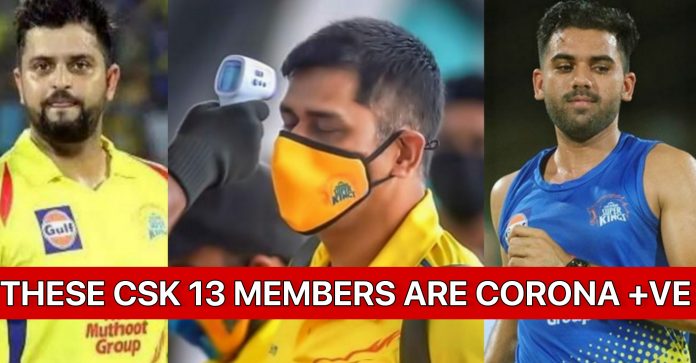 Chennai Super Kings suffered a massive blow ahead of IPL 2020. The heavyweights have reached UAE last week and are gearing up to team training this weekend. However, as per the latest reports, there are few members in the team that were tested positive for COVID 19.

This is a setback for three time defending champions as they were supposed to start their training on Friday. On the other hand, Chennai Super Kings had held a mini camp at their base location in Chennai. During this camp, most of the players and staff were involved. They remain the only team to have held a camp before departing to UAE.

As per the protocol for this IPL, all the teams had to undergo a six day mandatory quarantine period. During this phase, each member will have to take three PCR tests for Corona on Day 1, 3 and 6 respectively. Only if the members are cleared negative in this test, then they will be allowed to take part in team training. However, the names of the people infected for Corona are yet to be made public. But as per the latest trends, it looks like Deepak Chahar is the only cricketer to have been infected along with few staff members.

Now the entire Chennai Super Kings squad, officials and support staff will undergo an additional Corona test on Friday. However, they have to wait for their results till Saturday. If the results turn out to be negative, they can make preparations to team training ahead of IPL 2020.

“Even when football started in Europe, a few players had tested positive. So with eight IPL teams and over 1000 members, this was a possibility. This could have happened to any team. It is just unlucky that it has happened to CSK despite taking all kinds of precautions,” the source close to developments told TOI.

In reality, Chennai Super Kings management did instruct all the players and staff to undergo Corona tests before reporting to base camp at Chennai. All the members were negative at the time of the mini camp. But it is unfortunate to see their preparations in jeopardy with the latest development.

Despite all this, the Chennai team are once again firm favorites for IPL title. After winning the title in 2018 and narrow missing out in 2019, CSK are ready to mount a title challenge in IPL 2020.

MS Dhoni and Suresh Raina has already taken decision to retire from international cricket. Now they can solely focus on IPL and it will definitely boost the chances for Chennai to once again at least qualify for play offs this season.