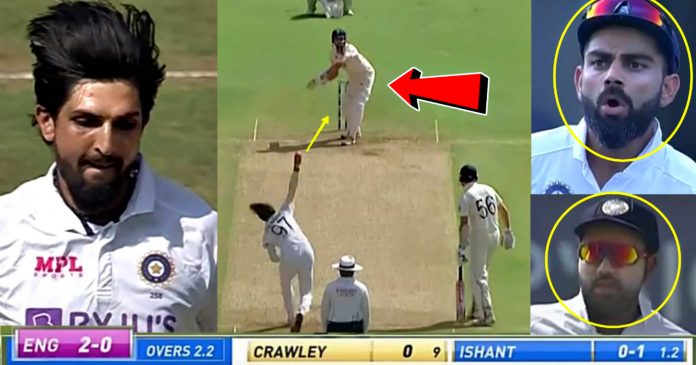 Ishant Sharma, the tall and lanky fast bowler became only the second fast bowler from India to play 100 tests as an out and out pace bowler. The third test between India and England is being played in Ahmedabad.

He celebrated this special achievement by picking up a wicket in his second over by dismissing English opener Dom Sibley for a duck. The batsman edged one off Ishant to slips where it was gobbled up by Rohit Sharma in second slip leaving England 2-1.

This test is the first ever day night match between the two nations. As soon as the two captains went out for toss, Ishant’s name was etched into the history of fast bowling greats who went on to play more than 100 tests for their respective countries.

Before Ishant, only the great Kapil Dev had played 100 tests for India as a specialist fast bowler. This stat alone shows how difficult it is to play this long if you are a fast bowler for India.

Even in international cricket, Only 10 quick bowlers have played more than 100 tests. This list includes some all time great players. They are as follows -:

Ishant Sharma, a tall fast bowler belongs to Delhi. Born on 2 Sep- 1988, he made his first class debut for Delhi at the age of 18. After an year of good performances at national level, he was selected for India in 2007 when India was touring Bangladesh for a 2 test series.

The quick bowler made his test debut in the same series and picked up a wicket in the test. The big moment for Ishant came when he took a 5 wicket haul against Pakistan on a flat wicket. This performance made the world stand and take notice of the rookie bowler.

Based on this performance, Sharma was then rewarded with a selection in the Indian team for the upcoming tour of Australia. He played three tests on this tour and although could not pick up a lot of wickets but still his bowling made the Australians uncomfortable  throughout the series.

Particularly, his spell to Ricky Ponting at the Perth test was a spell of dreams. Ponting was the world’s best batsman at that point of time and he couldn’t lay bat on ball for much of Ishant’s spell. Ultimately Ishant dismissed him as India went on to win the match.

It was in the year 2011 when Ishant completed his 100 wickets in 33 tests vs West Indies. Four years later Sharma took his 200 wickets in 65th test against Sri Lanka. In his 98th test, he took 300 wickets by dismissing Dan Lawrence. Unfortunately, Ishant is the slowest to take 300 wickets amongst the specialist bowlers.

However, Sharma has been a much improved fast bowler since 2016. He has been averaging just 23.54 during this period. That average improves further to 20 since 2018 as he has become the pace spearhead of India along side Jasprit Bumrah.

After playing for nearly 14 years, safe to say that he is the work horse of Indian team who never ever gets tired and we may see more from him in future test series for India!