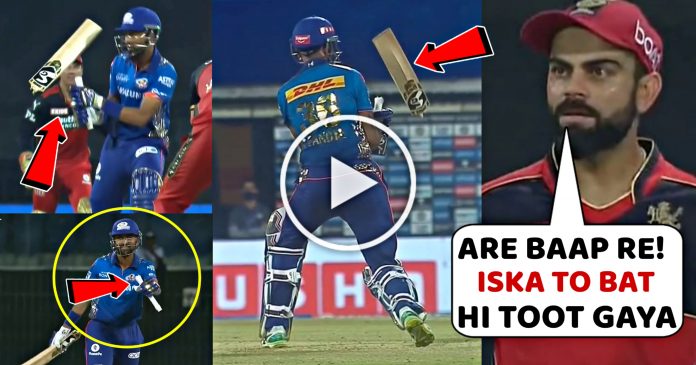 The blonde haired cricketer from Kiwi land stands at 6’8, bowls at 145. Also, he can belt the ball a long way in death overs. His Yorkers at the slog overs is also quite difficult to hit. Bangalore brought him to counter their death bowling problems. The problem which has plagued them for number of years. Hence, they brought Jamieson in by shelling a lot of money.

Jamieson made his debut in today’s match and naturally, all eyes were on him and his death bowling. He finished with figures of 4-0-27-1. The figures can be called quite economical considering Mumbai made 159-9 in 20 overs.

The best moment, however off Jamieson’s bowling came in the 19th over of the innings. The third ball of the over was a no ball and was also a short ball. The ball at low pace was of no problem to Krunal Pandya who hammered the delivery for four via a pull shot. Moreover, the no ball was actually called because only three fielders were inside the circle when there should have been four.

The next ball was a free hit. It was a bread and butter scene for Krunal Pandya. He waits for such situation as this where it is slog over and a free hit on top to boot. Hence, everyone expected a big shot of his bat.

However, Jamieson had other ideas. He ran in with purpose and fired a Yorker which was spot on at an impressive pace. All Pandya could do was to bunt the ball back to Jamieson as this was searing in at the base of the middle stump. Also, such was the force of the ball that even Pandya’s bat got broken into half and he looked shocked.

It was just the kind of ball for which Kyle Jamieson was brought in by RCB and in the process, breaking the bank. Any other delivery than Yorker could have been disappeared for a six but Jamieson held his nerve and bowled a brilliant Yorker to make the free hit a non scoring shot.

Watch the video of the Yorker here.