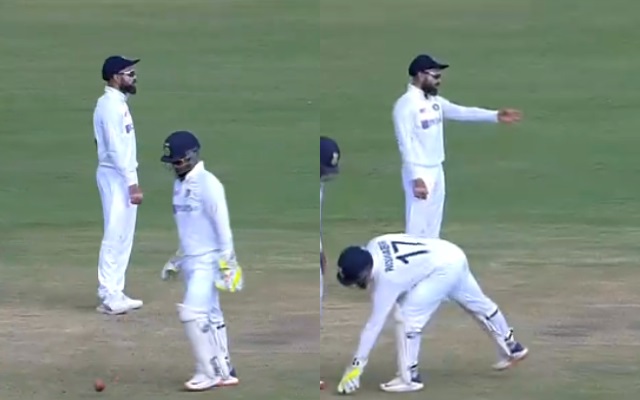 Indian captain Virat Kohli is never shy of expressing his dissatisfaction when something is not going correctly. The 32-year old has been at the forefront of India’s renaissance in test cricket over the past few years.

Known for his fearless cricket, Kohli has brought the team a long way in recent years. During the first test against England, the Indian skipper was seen complaining to umpire Nitin Menon.

Jofra Archer hit a ball to deep backward point and jogged for a single. But he clearly ran on the pitch and Kohli immediately complained about it.

England bowlers were spot on with their lines and lengths in the final innings of the match. They bowled brilliantly on a pitch that was doing its tricks. Jack Leach who had a nightmare against Rishabh Pant in the first innings, came back strongly.

After dismissing England cheaply in the second innings, Indian batsmen were unable to bat out the final day. James Anderson bowled his best spell in India in his glittering career. Once the ball started reversing early in the day, Anderson was virtually unstoppable.

The form of Indian top order is a cause of concern for the team management. In both the innings, the top order failed the team as India lost 4 wickets inside 100 runs. Virat Kohli was the lone warrior on the final day as he tried to bat as long as possible.

But he had no support from the other end. Eventually England bowlers made inroads and got Kohli dismissed. The hosts went into the match as overwhelming favorites but could not do justification for the tag.

The second test will begin in three days time and toss will once be crucial for both teams. India will look to bounce back after a horrible loss in the first test.

Watch Prithvi Shaw gets hit between the legs by the ball. Falls immediately on...