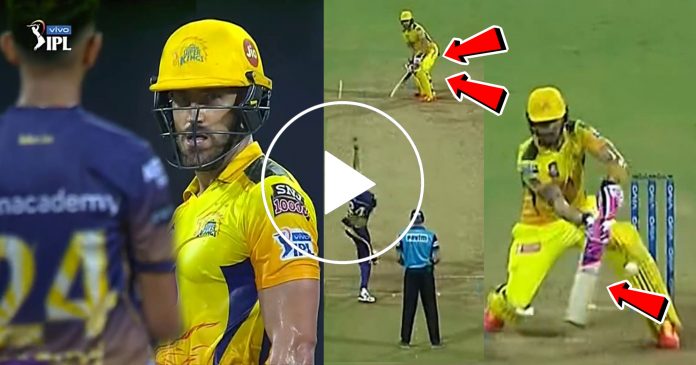 Chennai has scored a massive 220-3 in their allotted 20 overs against Kolkata Knight Riders. Everyone from the Chennai team contributed to the massive score by hammering the Kolkata bowling. It all started with their openers. Faf Du Plessis and Rituraj Gayakwad opened the floodgate of boundaries.

Faf Du Plessis remained unbeaten till the very end and carried his bat. He scored 95 in 60 balls and hit 9 fours and 4 sixes. The batsman played the main role in Chennai’s ultimate score of 220 as he held one end up as the batsmen at other end went berserk.

The first boundary of Du Plessis came off Pat Cummins. The batsman punched Cummins for a four through covers. Sunil Narine in the next over was thrashed for a four via point region for another boundary.

His first six came in the next over. The spinner Varun Chakravarthy was launched over long off for a huge six. Then in the eleventh over, Faf hit his second six to Kamlesh Nagarkoti over mid off. The batsman reached his 50 in 35 balls when he carved Varun C for a four through off side.

However one moment happened between Faf Du Plessis and P Krishna that became the talk of the town. It was the 16th over of the innings.

P Krishna was bowling to Moeen Ali and Faf Du Plessis. It was the fourth ball of the over. The bowler delivered a pacy full toss and beat the defense of Faf du Plessis. His stumps were saved by a whisker. After that delivery, Krishna went near Plessis and stared him for long. He was trying to intimidate him and trying to give a message that its not easy to face him. In reply, Faf said nothing but only smiled back at him.

However, Faf got his revenge the next ball. The pacer bowled a slower ball at 108kms. Faf judged the length and the pace of the delivery. He quickly got down on his knee after coming across to the off side. As soon as the ball arrived, the batsman scooped it over the keeper’s head for a four. It was a classic revenge moment.