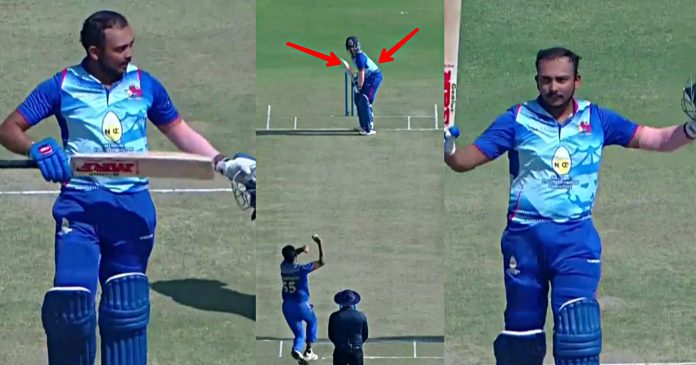 Prithvi Shaw became only the Eighth Indian to score a double century in 50 overs/list A games. Shaw scored a fantsatic 227 unbeaten against Puducherry in a league game of Vijay Hazare trophy. This is Prithvi’s second score over a 100 runs in as many games. In the previous game as well, Shaw had hit a century.

Puducherry won the toss and elected to field first. The opener Yashasvi Jaiswal was soon dismissed at the individual score of 10. The number 3 batsman, Aditya Tare then formed a partnership of 153 runs with Shaw before he was out.

It was then the entrance of Surya Kumar Yadav at number 4 which truly turned the tables. Both hit the hapless Puducherry bowlers all around the park for fun.

While Shaw hit a double century of just 142 balls, Yadav smashed his century in just 50 balls! The two amassed 201 runs in just 103 balls.

Surya Kumar Yadav perished at the score of 133 of just 58 balls which included 22 fours and 4 huge sixes while Shaw remained unbeaten at the score of 227 runs in a mere 152 balls. The batsman hit 31 fours and 5 sixes.

Mumbai in their allotted 50 overs finished with a colossal 457-4. Pankaj Singh was the most successful bowler picking up 2 wickets giving 79 runs.

Prithvi Shaw has been out of the test of the team after a disappointing Australian tour. His technique against incoming deliveries were exposed and hence, he was dropped to rectify his technique.

He has been called as the next big thing since his under 19 days. Its expected that he will carry on the legacy of Virat Kohli when the latter retires. Shaw started his test career by hitting a century in his debut series vs the West Indies but then his form fell away.

Looks like now Shaw has come up with a rejuvenated technique and better temperament and if his form has form has anything to go by, he might soon get back into the Indian team.

Watch the moment when Shaw hit 200, here in the video-:

Prithvi Shaw becomes the fourth Indian with a List-A double hundred. What a moment! pic.twitter.com/jHxvAJzntF