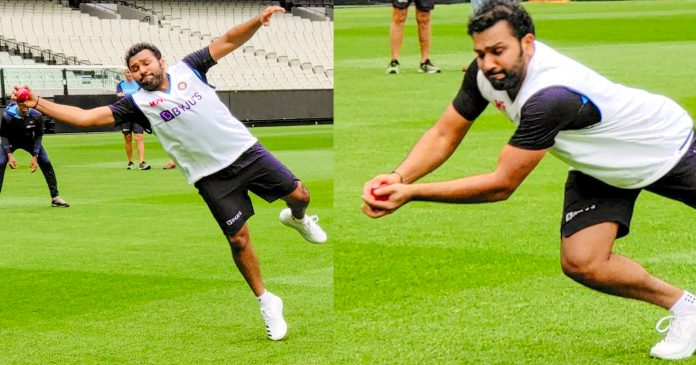 However, it is subjected to medical assessment from staff. After suffering a hamstring injury in IPL, Rohit Sharma missed huge parts of the T20 league. But he made comeback in the knockout stages of the tournament.

He led Mumbai Indians to a record 5th title. But BCCI have held back Rohit as they decided to not take any risks with him. This meant he could not participate in both T20I and ODI series against Australia.

He continued his rehabilitation and recovered completely earlier this month. After clearing the fitness test at NCA on December 11, Rohit Sharma was given clean chit to fly to Australia.

But he was asked to undergo a two week mandatory quarantine as per Australia’s local regulations. The 33-year old completed his quarantine and joined the team yesterday. India are still in Melbourne and are already gearing up for the third test in Sydney.

The team have held a training session today and Rohit Sharma participated in the fielding drills. He looked at ease during the practice session and is highly likely to make it to the starting XI for Sydney test.

He will be an opener and will add huge quality to India’s struggling batting unit. With Shubman Gill impressing in second test, Mayank Agarwal could make way for Rohit Sharma.

“The engine is just getting started and here is a quick glimpse of what lies ahead,” their tweet read.

The engine is just getting started and here is a quick glimpse of what lies ahead. #TeamIndia #AUSvIND pic.twitter.com/3UdwpQO7KY

Team India will leave to Sydney on January 4th. The third test will begin on January 7th which will give plenty of time for both the teams to prepare. Australia are also going to have David Warner back into the team. It will also add more teeth to their batting lineup which failed to show aggression in the first two test matches.

Meanwhile, India are sweating over the fitness of veteran pacer Umesh Yadav. The experienced campaigner has played good in the first two tests but suffered an injury during Australia’s second innings. Should he fail to be fit for third test, young Navdeep Saini should get the nod.

Watch : Shocking catch by Rahul Chahar at boundary. Converts a six into wicket.