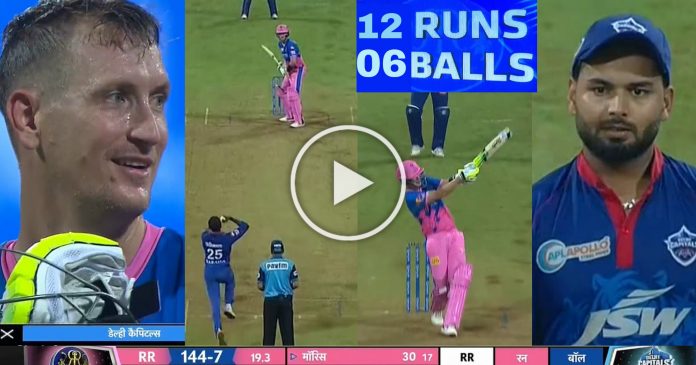 In a sensational come back, Rajasthan Royals have defeated Delhi Capitals by three wickets. The hero of this unlikely victory was, their most expensive from the auction was their most expensive player Chris Morris. The all rounder from South Africa held his nerves in the final over to take his team to victory.

The veteran all rounder from South Africa justified his high price in the auction by hitting two sixes in the final over as Rajasthan Royals completed up come from behind victory.

Last over of the match was bowled by English all-rounder Tom Curran. Rajasthan Royals required 12 runs in 6 balls to win. Chris Morris and Jaydev Unadkat were waiting at the crease.

Morris the Hero finishes it

The first ball from Tom Curran was a Yorker length delivery. Chris Morris guided the ball towards the extra cover where the fielder, Prithvi Shaw was slow to react. By the time, he picked up the ball and threw it to the keeper, both the batsman had run for two.

Now 10 runs required of 5 deliveries. The next delivery was a horrible one as pressure took its toll on Tom Curran. In order to ball a slower delivery to Morris, he delivered a short and slow delivery which was just the ideal length for Chris Moris to hit. He smashed the ball over the square leg for a huge six.

Third delivery was again a length delivery. This time Morris smashed it but into the hands of extra cover. They did not run the single as Morris choose to retain the strike.

The next ball was when, the game was finished. It was a terrible delivery. Tom Curran, while trying to deliver a Yorker bowled a knee high full toss and Morris was not going to waste it. He hoicked the ball into the leg side for another maximum. This sparked wild celebrations into the camps of Rajasthan Royals.

After missing out, in the last game in a close match against Punjab, this time Rajasthan Royals came on the better side of the resultof a close match. They won by two balls to spare and 3 wickets in hand.

Watch the thriller final over here:

Watch: Deepak Chahar Speaks For The First Time After Returning to Team Training