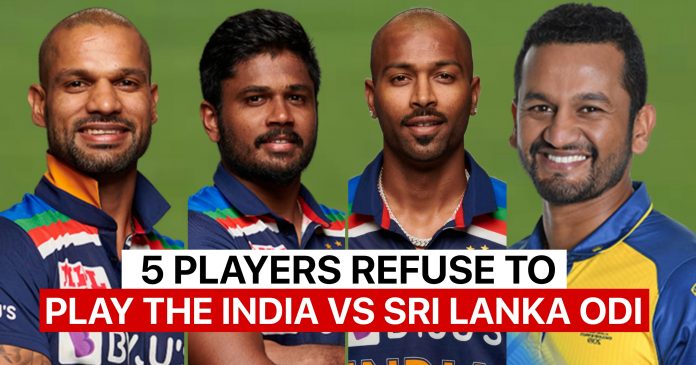 The India vs Sri Lanka series will begin in a week’s time. Indian team has already started their preparations under the leadership of Shikhar Dhawan. Moreover Rahul Dravid will be the coach of India for the first time. Since a lot of younger players are a part of the Indian squad, fans are eagerly waiting to see the performances of this team.

However just before the start of the series, a news has come as a major set back for Sri Lanka. As if the suspension of trio of Niroshan Dickwella, Kusal Mendis and Danushka Gunathilaka was not enough, five more players have been disallowed from joining the team bio bubble.

The five players are Lasith Embuldeniya, Vishwa Fernando, Lahiru Kumara, Ashen Bandara, and Kasun Rajitha. Actually Sri Lanka Cricket Board has offered a contract to a set of 25 players who would play against India. But only 20 out of the 25 players signed the contract while the other 5 did not. Hence, they were not considered to be included in team’s bio bubble.

Hosts going through a crisis!

Ashley De Silva, the CEO of Sri Lankan Cricket Board said about the players :

It will be interesting to see what would happen next in the face off between the board and 5 Sri Lankan players.

The first ODI will be played on 13th of July.