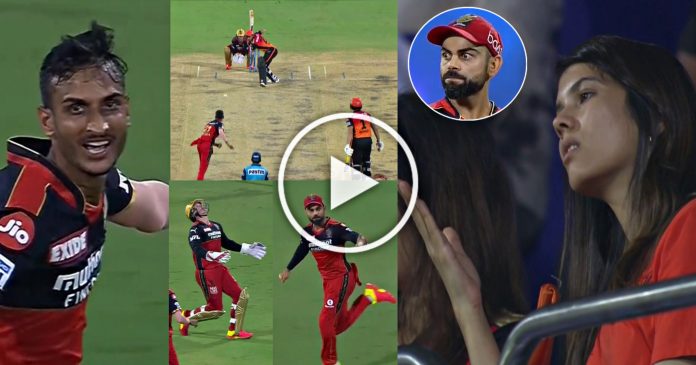 The Match  started to turn when Shahbaz Ahmed the left arm spinner came to bowl. He came to bowl in the 17th over of the match.

Sunrisers Hyderabad was sitting pretty 115 for 2 after 16 over. That is when a set Manish Pandey and the man in form Jonny bairstow were batting. In the next 4 overs, they required just 35 runs with 8 wickets in hand. In short, Sunrisers Hyderabad were the favourite to win the match.

Since it was a slow wicket Virat Kohli brought in the left arm spin off Shahbaz Ahmed. He was to try and take a wicket. Little did, Virat know that this will eventually prove to be a match turning decision.

Three wickets in 1 over

The first ball Shahbaz Nadeem bowled was tried to be slog swept by Jonny bairstow. But he miss timed the ball and it went straight up in the air. Then, AB de Villiers did not make any mistake and took the catch and Bairstow was out.

On the very next ball Manish Pandey tried to come down the track and dismiss Shahbaz Ahmed over his head. But, just like Bairstow, he also miss timed the ball. The ball took the outside edge and flew straight to the man at short third man where he took a simple catch. Now Sunrisers Hyderabad had lost 2 wickets in 2 balls.

Vijay Shankar the new batsman avoided the hat trick ball. Then he played out a dot. On the fifth ball he, took a single. Then Shahbaz Ahmad struck gold.

He dismissed danger man Abdul Samad. The batsman also tried to play the same stroke which Bairstow tried to do earlier in the over. Just like him, the ball got up in the air and Shahbaz Ahmed took the catch of his own bowling. This eventually proved to be a match turning and a decisive over.

Watch the brilliant over by Shahbaz Ahmed here