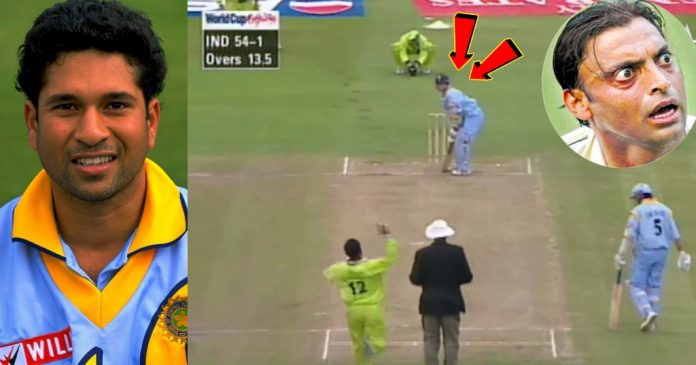 However, none of this cliches and sayings were on the minds of the players, people and the countries when these two teams played against each other a game of cricket.

We are talking about a World cup match between arch rivals India and Pakistan. This game was played between India and Pakistan when there was a full blown war happening between the two countries at the border!

India and Pakistan had always been arch rivals since the partition of Indian subcontinent. No matter whatever the format and the year was, a game between the two countries is to be a sell out. A world cup on top of that brought extra pressure on both the teams.

But this game of cricket had a different prelude to it. It was India vs Pakistan in a world cup match. And, if this was not enough, then consider the fact that while this game was taking place, India and Pakistan were involved in a military altercation at the border back home! It was a full blown war taking place between the two Asian nations!

The tension between both the teams when they stepped on to the field for the game was palpable. Not only the players and fans but every one who was part of their respective countries waited with bated breath. In an atmosphere of a War, none of the players would have liked to lose against their opponents. Any mistake in the match could have been resulted in career threatening criticism and being an instant villain in the eyes of general public.

The two captains were Mohammad Azharuddin for India and Wasim Akram for Pakistan. It was the Indian captain who won the toss and decided to bat first. The openers Sachin Tendulkar and S Ramesh were up against the threating pace duo of Wasim Akram and Shoaib Akhtar. The latter was the fastest bowler of the world at that point of time.

Indian openers added 37 runs for the first wicket before S Ramesh fell to Abdul Razzaq. Tendulkar and Rahul Dravid then added 56 runs for the second wicket. Then, Tendulkar was dismissed at the score of 45 runs. The bowling of Pakistan was quite disciplined as India lost wickets at regular intervals.

Rahul Dravid made 61 and was the top scorer for his team. Indian captain Azhar made a quick 59. It was his lusty blows towards the end which propelled India to a score of 227-6. That wasn’t a good score but still competitive, nevertheless.

Pakistan had a star studded batting line up which had the likes of Saeed Anwar, Salim Malik, Afridi, Ijaz Ahmad, Moin Khan and above all, Inzamam Ul Haq. A target of 228 shouldn’t have been too difficult for them. But then it was a pressure game. It does strange things even to the most accomplished athletes!

The Pakistan innings started on a sombre note as opener Shahid Afridi was quickly sent back to the pavilion by Javagal Srinath. Soon, the number 3 Ijaz Ahmed too fell to Srinath. This wicket opened a pandora box for Pakistan. Hence, the next 3 batsmen soon fell quickly leaving Pakistan in tatters at 78-5 during 25th over.

Moin Khan and Inzamam Ul Haq then stopped the flow of wickets but the pressure of run rate kept increasing. Eventually Moin Khan was dismissed by Venkatesh Prasad after he scored a quick 34 off just 37 balls. From there on, it was just a matter of time and mere formalities to be completed.

The last Pakistani wicket which fell was its captain Wasim Akram. He was out caught when he flicked one to square leg off Prasad. Pakistan was bundled out for 180 as India won by 47 runs.

For India, Venkatesh Prasad was the hero of the match as he picked up 5 wickets at the cost of 27 runs in 9.3 overs. No wonder, he was adjudged man of the match.

In a game of high tension and pressure, India prevailed over Pakistan. India did not qualify for the knock outs in this world cup, but they could still held their heads high. They had afterall, beaten their arch rivals in yet another epic showdown.

Watch the video of this clash here: