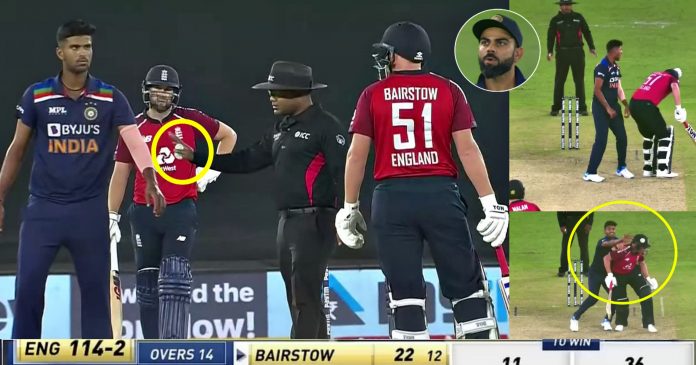 India and England are up against each other in the first T20 game in Ahmedabad. England had won the toss and decided to filed first. The decision to bowl was proved to be spot on as India started in a horrible fashion. None of the top 3 batsman could score in double digits. Kohli was gone on 0 while Rahul and Dhawan too made 1 and 4. For India, Rohit Sharma was rested and Dhawan played ahead of him. 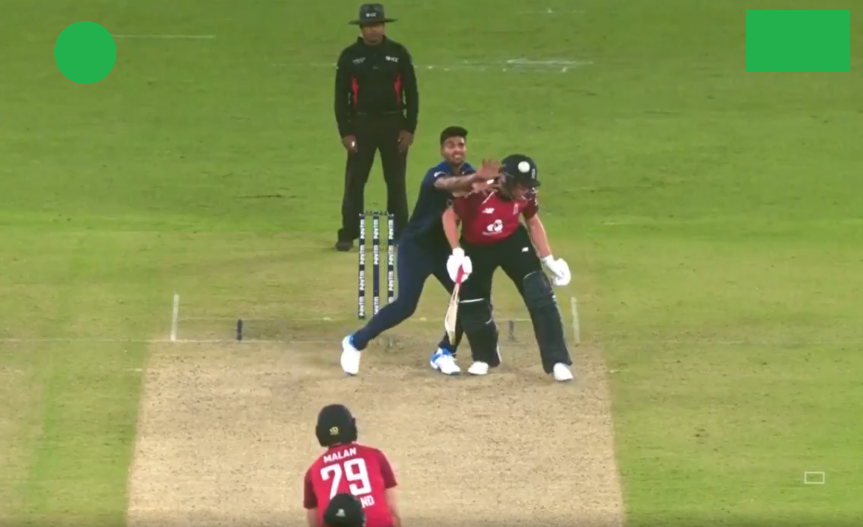 India made a modest 124-7 on the back of Iyer’s 67. Except him, everyone struggled. Archer picked up 3 wickets while Adil Rashid took the most important wicket of Kohli.

In reply, English openers started on a positive note. They made sure that there are no hiccups while England are chasing. Both looked comfortable against the Indian bowlers be it the spinners or the pacers.

England reached 50 runs in the first powerplay itself. The first wicket of England fell when Buttler was considered LBW off Chahal. The score at that time was 72 in 8 overs.

Buttler had scored 28 runs off 24 balls. The next wicket fell soon when Jason Roy was also adjudged LBW off Sunder. He scored 49 runs and missed his half century by just 1 run.

However, the moment of the match arrived when Sunder was bowling and Bairstow was standing at non strikers end while Malan was batting.

Malan had played a shot in the air as the ball travelled straight. It appeared that Sunder will catch the ball. But as soon as he came in the direction of the ball, he collided with Bairstow. The bowler thought that Bairstow had intentionally did it.

However, with the repeated camera angles from all sides, it was clearly visible that the incident of Bairstow was an unintentional one.

However by that time, Sunder had already told something to Bairstow and had rather reacted angrily at him. The batsman gestured that it was not his fault as he was caught in the direction of the ball and was just trying to save himself from getting hit.

Such was the verbal duel between the two that even the umpires had to intervene. After the intervention of the umpires, both the players went back to their respective places.

In a long tour of 4 tests old, this is the first time that players from either sides have come face to face with each other and had to be separated by umpires.