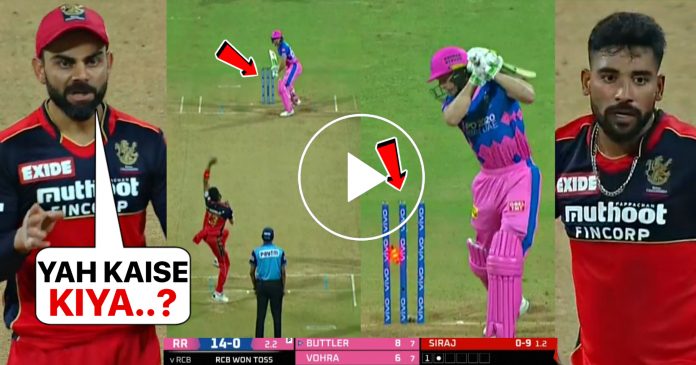 Rajasthan Royals and Royal Challengers Bangalore are facing each other in Wankhede stadium, Mumbai. This is the 16th match of the IPL in this season. Virat Kohli won the toss and elected to field first. The decision of him proved to be correct as, the two new ball bowlers, Mohammad Siraj and Kyle Jamieson took wickets inside the powerplay itself.

The first one to fall was Jos Buttler who is also the best batsman of the double R’s. He was cleaned up by a brilliant delivery from Siraj. It was the third ball of the third over. Buttler tried to hit, the bowl on the leg side by, moving to the off side. In the process, he exposed all his stumps.

Siraj saw this and slanted a quick delivery on the leg stump. Buttler, missed his attempt at glancing the ball and it, crashed in to the leg stump. The danger man Buttler could make only 8 runs in 8 balls.

Then, in the fifth over, Siraj struck again. It was the third ball of the over. The batsman dismissed was David Miller. It was another stunning delivery by Siraj who bowled a Yorker at the base of stumps. The batsman was surprised, by the delivery and tried, his best to defend it. But it still hit his boot before hitting his bat.

All the players appealed but, the umpire was not convinced and, he gave not out as the decision. The skipper Kohli, instantly took the review and in the replays, it was clear. The ball had first hit the boot and then the bat. The decision was, over turned and Miller was on his way. The leftie did not, disturb the score board and he, was gone for a duck.

Siraj did not stop here. He then dismissed Rahul Tewathia who, was hitting big in the last overs.

It was a slower delivery outside off. Tewathia went for a shit over the cow corner. But, he mistimed the ball and presented an easy catch to the fielder stationed there. Tewathia made 40 runs in 23 balls.

Siraj finished with brilliant figures of 4-0-27-3.

Gautam Gambhir Chooses Favorites For IPL 2020 Between MI and CSK