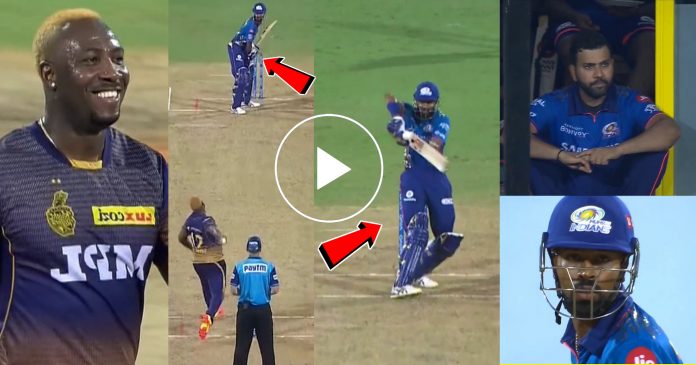 Andre Russel is one of the most feared player in T20 cricket. The muscular cricketer from Jamaica can change the course of the match with his bat in a matter of minutes. Called as Russel the Muscle and also as Russel Mania, bowlers are intimated by his presence at the wicket. To sum up in one word, he is a genuine match winner in T20 cricket.

Once again, Russel did something that might have taken his team into a strong position. But this time, he did not do it with his bat. It was his bowling which has resulted in a potential match winning performance. The all rounder has taken a five wicket haul vs Mumbai Indians which has always been a bogey team of Kolkata Knight Riders.

The most interesting aspect of his bowling was that he took the fifer in just 2 overs of bowling. Russel came to bowl the 18th over of the innings. His first victim was his friend from West Indies and another big hitter like him, Kieron Pollard.

Bowling from round the wicket to wide of the crease, he coaxed Pollard into hitting a boundary over extra cover. But the poor batsman could only edge it to the wicket keeper Dinesh Karthik. two deliveries later, he struck again.

Marco Jansen tried to hit one over sweeper cover but he mistimed the shot and was taken at the covers by Pat Cummins. Then in the next over, Russel took three wickets which also happened to be the last over of the innings.

After hitting the first two balls of the over for fours, Krunal Pandya was foxed by a slower delivery and he gave a simple catch to the short fine leg fielder. On the very next ball, Bumrah pulled one to the fielder at mid wicket as Russel got two wickets in two balls.

Rahul Chahar avoided the hat trick ball by taking two runs on it, but on the last ball of he over, he also tried to hit a shot over mid wicket which was taken by the fielder stationed there. Andre Russel took 3 wickets in 4 balls to finish with amazing figures of 2-0-15-5.

Watch : These 5 players can make a debut in second T20 match today