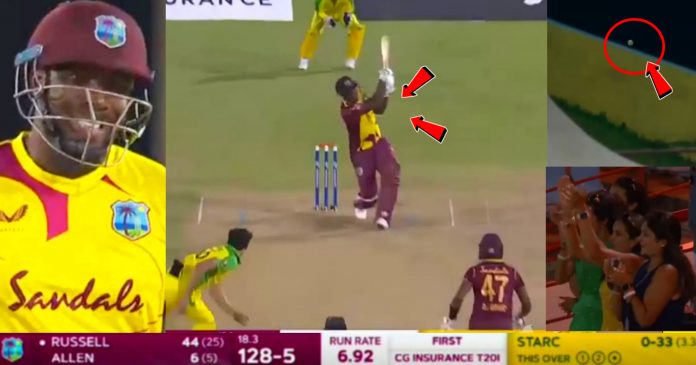 West Indies beat Australia by 56 runs in a one sided encounter to go 2-0 up in the 5 game T20 series. To stay alive in the series, Australia needs to win the next game. Batting first West Indies made a huge score of 196-4 in 20 overs. The opener Lendl Simmons creamed 30 runs in 21 balls and Dwayne Bravo made 47 in 34 balls. However it was Shimron Hetmyer with the top score for West Indies. He contributed with 61 runs in 36 balls before being run out. But the impetus to the innings was provided by none other than Andre Russel.

The burly all-rounder one again smashed the Aussie bowling to all parts just like in the last game. In this match he played a cameo of 24 runs in just 8 balls at a strike rate of 300! It was Russel’s innings that took the West Indies total to an imposing 196.

The explosive batsman came to bat with just 2 overs left and the score of home team at 164-4. He faced his first ball in the 19th over bowled by Mitchell Starc. The first delivery was a pin point Yorker. Second delivery was just short of being a Yorker and was flicked towards square leg for a four.

Third ball of the over was thumped over long on for a huge six by Russel as Starc missed his mark once again. It was a gigantic shot that went many a miles. Starc followed it with a short ball that was pulled for a single by the batsman.

In the last over Dan Christian bowled the second delivery to Russel. It was a length delivery and was clobbered to long on for a four. The all-rounder then took a brace on the next ball before taking a single.

Russel returned to the strike on the last ball of the final over. The bowler Dan Christian tried to bowl a Yorker but missed his length by inches. This was just the invitation Russel needed. Consequently he went down on a knee and smashed the daylights out of the ball over long on for another colossal six.

Watch the innings of Russel here: