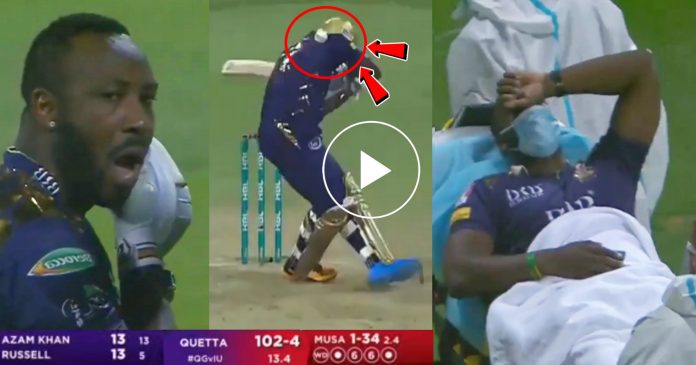 Star West Indies all rounder Andre Russell had a horrible outing in his first match of the Pakistan Super League. Playing for Quetta Gladiators, he had to be rushed to hospital from the dressing room. Moreover, his condition became so vulnerable that he went to the Ambulance on a stretcher from dressing room. According to latest news, he is fine and will be discharged soon. 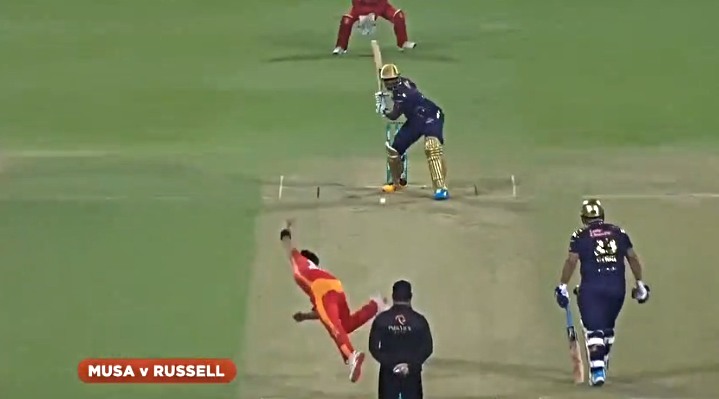 Earlier, Quetta Gladiators and Islamabad United clashed against each other in Abu Dhabi as PSL resumes after being postponed earlier in the year. The captain of Islamabad United, Shadab Khan won the toss and elected to field first. None of the batsmen of Quetta could score runs freely as they were bundled out on 133 in 20 overs.

Russell came to bat at number 6 when the score was 88. Musa Khan, the pace bowler bowled the next over. On the second ball of the over, Khan bowled into the pads of Russell who swatted it over mid wicket for a six. There was no difference to the result on next ball as once again Russell thumped the bowler over deep mid wicket through a boisterous pull shot.

However, Musa Khan came back strongly on next ball. He delivered a pin point short ball aimed at the batsman’s head. Russell again tried to hit it, but got beaten by the pace as the ball thudded into his helmet. Hence, he quickly removed his helmet and sat down on his knees as the team physio came running up to him.

The batsman passed the concussion test on the ground and continued to bat. However, he was dismissed the very next ball for a score of 13 runs in 6 balls. After the Quetta innings got ended, Russell did not take the field again. Consequently, he was replaced by fast bowler Naseem Shah as a concussion replacement.

In reply of 133, the openers of Islamabad United made a mockery of the total. Usman Khawaja and Colin Munro whacked the Quetta bowlers to all parts of the park as they chased down the total in just 10 overs. Khawaja remained unbeaten on 40 and Munro was not out at 90* in just 36 balls. For his explosive innings, Munro was adjudged the man of the match.