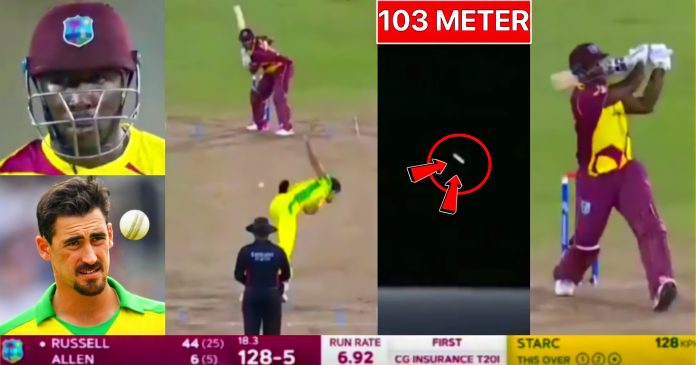 Andre Russell produced a thumping innings of 51 runs in the first T20 against Australia. His amazing knock helped West Indies reached a total of 146 runs that proved to be just enough for a victory. The right hander once again showed that why is he considered one of the most destructive batsman in the shortest format of the game.

He came to bat at number 6 with West Indies in trouble at 66-4 in 12th over. His first boundary came in the very next over when he smashed a drive over mid off for a four against Adam Zampa. Russell then thumped Ashton Agar for back to back sixes in the 15th over.

On the fourth ball of the over, the batsman whacked the spinner for a six over square leg. The next ball was hammered over long on for second consecutive six of the over. Mitch Marsh was bashed for a two bounce four into leg side in the next over.

Andre Russell at his destructive best!

Mitchell Starc wasn’t spared by Russell either. In the 17th over of the innings, the batsman pumped the left handed pacer Starc for two successive sixes. The first ball of he over was a fulltoss and dealt accordingly by Russell. He punished it over long on for a gigantic six. A similar result came on the next ball when a full ball was blasted over long off for second six in as many deliveries.

Russell completed his 50 in the penultimate over of the innings. It took him 26 balls to reach his fifty. The allrounder achieved the feat when he pulled a short ball over deep square leg. Interestingly this was Russell’s first ever 50 in the shortest format of the game.

Finally he departed in the last over of the innings. It was a Yorker from Hazlewood as Russell tried to lift it over covers. However it was a pin point delivery and all the batsman could do was to drag it to his stumps. Still he made sure that West Indies has a competitive total when they defend.