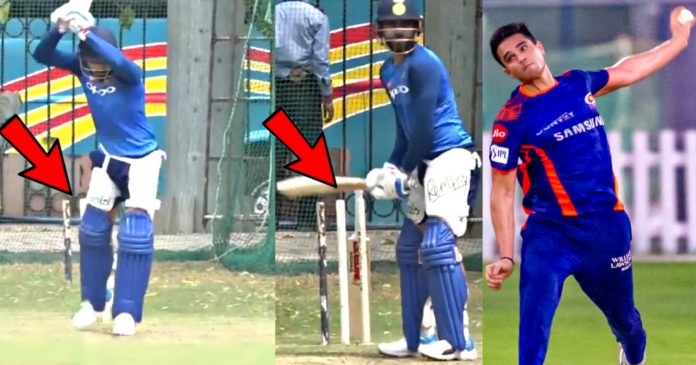 Before the IPL auction for 2021, Arjun Tendulkar was known only as the son of Great Sachin Tendulkar. Post the auction, people have started to know his as one of the player of Mumbai Indians.

The most successful franchise in IPL after winning the trophy 5 times, Mumbai Indians have bought him for his base price at 20 Lakhs. A lot of criticism has taken place on social media for this auction of Arjun. Fans have accused the Mumbai Indians management of getting involved in nepotism. It is alleged that Arjun has been brought in the auction only because he is son the Great Sachin Tendulkar.

However, when taking a look at the past of Arjun Tendulkar, there is little merit in this accusation of nepotism.

Tendulkar is a left arm swing bowler and a left handed batsman. He bowls with an average speed of 135km/83 miles and bats at number 7-8. It can be said that he is a specialist bowler who can bat a bit.

After that, Tendulkar was selected for India under 19 in the year 2018. Also, Tendulkar is a regular net bowler for Indian team and even for England team! He trained at indoor academy in Lords and has also represented many clubs in India and England.

In 2018 while bowling as a net bowler to the England cricket team, he delivered a Yorker to English batsman Jonny Bairstow which hit his toe. That hit on his toe was good enough to give the batsman an injury scare!

Exposure to such activities from an early age has to be credited for Arjun’s rise in state and league cricket.

Arjun as now has played 2 T20 games for Mumbai in Syed Mushtaq Ali trophy. His stat in both these games are 7-0-67-2. This gives an average of 33.5 and a strike rate of 21. His economy is on higher side at 9.57, but still its early days. His best performance with the ball is 1/33. He is yet to bat in senior level cricket.

With his inclusion in Mumbai Indians team, all eyes will now be upon him only. Both the fans and critics of will magnify his performances evenly. How, he handles the pressure, is the one to watch out for!

Watch Arjun Tendulkar bowling to Indian skipper Virat Kohli in the nets in this video-: