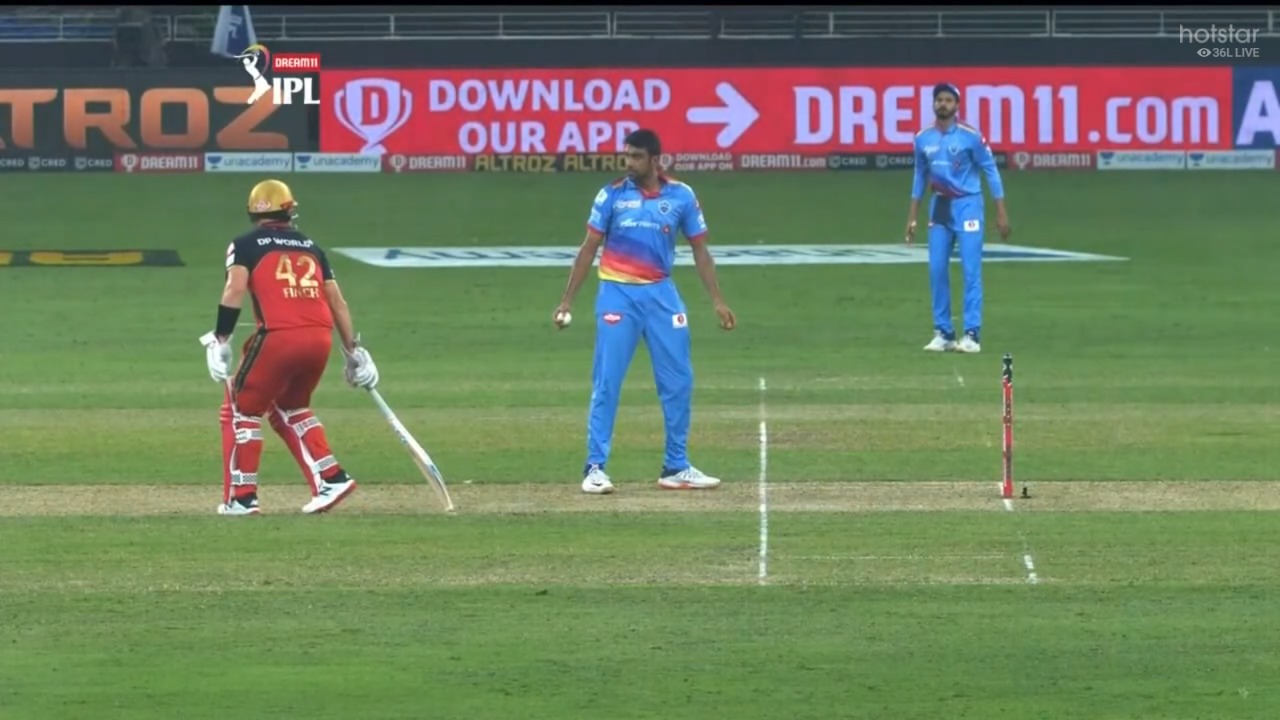 Delhi Capitals spinner Ravichandran Ashwin had given Aaron Finch a heart attack when he stopped from his action bowling. The veteran bowler had Finch’s wicket in his hand.

But he restrained himself from mankading Finch. Ashwin had previously mankaded Jos Buttler last season. The wicket has created lots of controversy whether mankading should be allowed in cricket or not. Delhi Capitals coach Ricky Ponting has never endorsed the act.

May be it could be one of the reasons why Ashwin decided against it. However, the 34-year old did let Finch know that if he oversteps crease, he can be mankaded next time.

It was fair play from Ashwin on this instance. If he decided to go on with the act, it might have created more controversy on the rule once again in the cricketing world. Despite all this, a batsman will be given out if Ashwin takes off the bail and appeals. As per the existing cricket laws, it is entirely correct despite the reluctance to accept from batsmen in general.

Here is the video of the incident.

Meanwhile, Royal Challengers Bangalore are losing their plot in the run chase. Having asked to bat first, Delhi Capitals have scored a mammoth 196 in their 20 overs. Openers Prithvi Shaw and Shikhar Dhawan gave their team the perfect start.

Prithvi Shaw once again started on aggressive mode and churned maximum runs in powerplay overs. Shikhar Dhawan has been a reliant opener for the side and is slowly getting back to his better form.

On the other hand, Rishabh Pant once again played with more maturity. While Stoinis was going all guns blazing, Pant took a backseat and anchored the innings. Stoinis impressed with a fifty once again as he is making it a good habit. Mohammad Siraj impressed with the ball in his first game of the season. But other RCB bowlers lost their way in the innings as bowling once again proved to be their weak link.

RCB lost their openers and AB de Villiers at the time of writing. They are currently reeling at 43/3 from 6 overs.  However, they still got Virat Kohli at the crease. It is going to be a miraculous run chase for RCB from this point. The match is important for both sides as the winner will go to the top of the table. Both teams are coming into this game with lot of winning momentum.

Watch Virat Kohli runs out Rohit Sharma in the curtain raiser of IPL 2021.