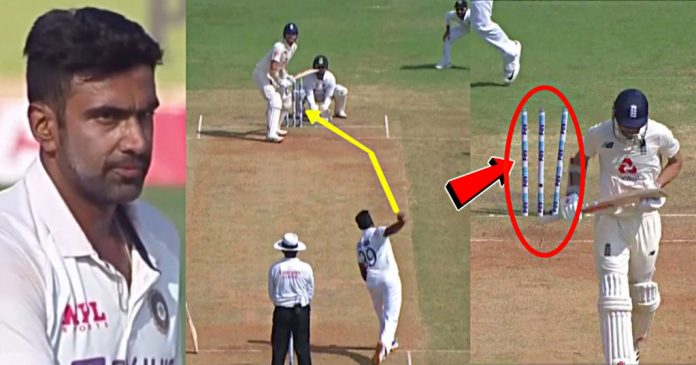 India’s right arm off spinner, Ravichandran Ashwin looks all set to reach 400 test wickets in the next game in Ahmedabad. The off spinner who will be playing just his 77th match, needs just 6 more wickets to, become only the fourth bowler from India to take 400 wickets and in all likelihood, the quickest from India and second quickest overall. Muttiah Muralidharan’s with 72 test matches is the quickest to get there.

Ashwin hails from Chennai, Tamil Nadu was born on 17 Sep 1986. He debuted for India in June 2010 when, the team toured Zimbabwe for a small limited overs series. His test debut happened an year later, in 2011 against West Indies at Delhi. Immediately, the tall spinner made an impact and since then, hasn’t looked back.

Initially, it was said about Ashwin, that he takes wickets, only on low, slow and turning wickets. Ashwin too struggled, in his first overseas tours, that includes trips to Australia, South Africa, New Zealand and England. Like all other spinners before him, who travelled to these countries ,struggled and Ashwin was no different.

However, Ashwin gradually started showing signs of improvements overseas. His records started getting better. Batsman had troubles playing him, even when the pitch wasn’t conducive for spin bowling.

Since 2016, he has been brilliant everywhere, no matter whether India is playing at home or outside home. In the recently concluded, India vs Australia test series in Australia, Ashwin was one of star performers for India with both bat and ball. He took wickets at 28 a piece and played a match saving knock in the third test match.

Statistically speaking, Ashwin is the most impactful Indian bowler to have played the game. He averages 25 runs per wicket. Comparatively, both Anil Kumble and Kapil Dev took wickets at 29 while, Harbhajan Singh took wickets at 32 runs/piece. These three bowlers, are the only ones from India, to take 400 wickets prior Ashwin.

When, it comes to match winning performances in a test series for India, Ashwin already has 7 man of series awards. Virender Sehwag is the next man on the list, with 5 such performances.

One of the reasons why Ashwin, takes so much wickets has been his ability to use, lots of variations and different deliveries while bowling to the batsmen. His dangerous and subtle variations completely bamboozles the batsmen. His carrom balls are nothing short of a death knell for a batsman.

Also, his deliveries which leaves a left handed batsman is particularly difficult for them to play. Needless to say he has been the most successful bowler ever to play against left handers. He is the only bowler ever in the history of cricket to have taken 200 wickets of left hand batsman.

With Ashwin all set to reach 400 wickets in the next game, he has a great chance of becoming India’s most successful wicket taker. He may end up surpassing 619 wickets of Anil Kumble!

Here are some of the best deliveries of Ravichandran Ashwin which produced wickets-:

Watch : Funny moment of Shami wrapping himself in a towel goes viral