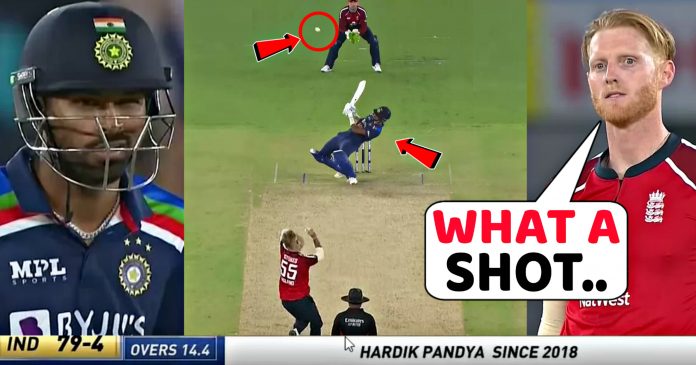 India seems to be in trouble in the first T20 game at Ahmedabad. England had won the toss and their skipper Eoin Morgan decided to field first. Their decision proved to be right as one after another, India lost 3 wickets within no time.

Rishabh Pant played a few freak shots but he too got out to Stokes leaving India in doldrums at 48-4 in 10th over.

Hardik Pandya entered at the fall of wicket of Rishabh Pant. Everyone expected him to tee off but the batter took his time. Coming into the match after a long time, Pandya started slowly. Against quality pace bowling of Archer, Wood and Jordan, Hardik struggled to get the timing right.

However, the first glimpse of Pandya’s hitting ability was seen when Ben Stokes came to bowl. Starting to bowl the 15th over, Stokes gave Pandya the perfect length to hit a boundary. It was smashed by the batter for a flat six over mid off.

The next ball was when the freak nature of Pandya was displayed. Stokes bowled a short ball to the batsman. Instead of trying to hook it for a six, Pandya arched back to the lowest which his body could handle and just ramped it over the wicket keeper for a boundary. Such was the shot that it almost went over for a six!

However, it fell just before the boundary for a two bounce 4. Not only this, Pandya fell down after hitting the ball as he has arched his body by too much.

It was a 4 which was hit by falling down on to the crease. After getting up, Pandya just got up casually and winked at Shreyas Iyer.

The reason for his winking was perhaps the shot which he played. The freak and weird kind of shot which can be hardly be found in cricketing books.

This was a kind of shot which makes Pandya also a high profile star in Indian limited overs team and a genuine match winner. Just his ability to manufacture shots from nowhere is a rare habit. The habit which makes him on of the most deadliest and explosive finishers in modern day cricket.

Watch the video of this here: