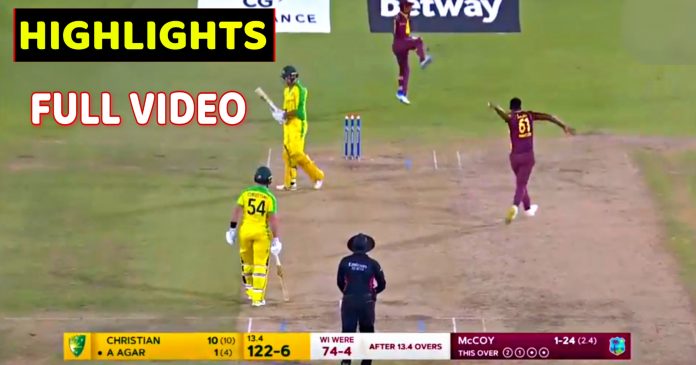 West Indies beat Australia by 18 runs in a sensational turnaround in the first T20 between the two teams. The Australian team under the leadership of Aaron Finch has travelled to the Caribbean nation for T20 series of 5 games. Accordingly the first match between Australia and West Indies was played at Gros Islet, St Lucia.

The tourists won the toss and elected to field first. It proved to be good decision as the hosts lost 3 quick wickets that included big wicket of Chris Gayle. The opener Lendl Simmons made 27 runs and Shimron Hetmyer chipped in with 20 runs. However the impetus to the innings was provided by burly allrounder Andre Russell. He smashed 51 runs in 28 balls and took the West Indies score to 145-6 in 20 overs.

For Australia, Josh Hazlewood was the most successful bowler. He broke open the top order of West Indies and returned with brilliant figures of 4-1-12-3. Mitchell Marsh also took 2 wickets and gave just 26 runs in his quota of 4 overs.

In reply of 146 runs, it was a case of 2 halves for the tourists. The first half saw them cruising towards the victory in 8th over at the score of 89-3. Second half saw them lose their way in a terrible fashion and were bundled out in the next 38 runs. Accordingly they lost 7 wickets for 38 runs.

Mitchell Marsh and Mathew Wade were the top 2 scorers for the tourists. While the former made 51 runs in 31 balls, the latter played a cameo of 33 runs in 14 balls. Other than these two, none of the other Aussie batsmen could stay at the wicket for long. The star of this West Indies victory was Obed McCoy a 24 year old left arm pace bowler.

He took 4 wickets for 26 runs in his 4 overs. His first wicket was Josh Philippe on the very first ball of his spell. The southpaw then returned in the second spell to clean the tail up as he took 3 of the last wickets. Australia ended up losing their last 6 wickets for 19 runs and were shot out for 127.

For his match winning spell, Obed McCoy was adjudged the man of the match.