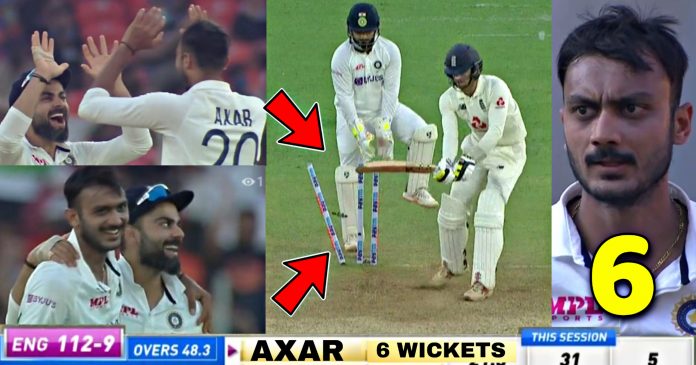 Axar Patel is playing just his second test but by the look of things, he appears a veteran of many tests. Playing in the series because Ravindra Jadeja is out injured, Patel has made sure that no one is missing the mercurial all rounder.

He made his debut just in the second game of the series. The debutant picked up a five wicket haul in it. Now, the bowler has now gone on one better in the third test and picked up another five wicket haul. This bowling performance made sure England are bundled out for a paltry 112 runs.

Overall, the left arm spinner picked up 6 wickets for just 38 runs. He bowled unchanged for 21 overs as his figures read – 21.4-6-38-6. This is the second best bowling stats by a spinner in a day night test.

The best performance by a spinner in a day night test belongs to West Indies spinner Devendra Bishoo. He took 8 wickets for 49 against Pakistan in Dubai.

Ishant Sharma who was playing his 100th test, picked up the solitary wicket. He dismissed the opener Dom Sibley.

Patel started his proceedings in the first session when he sent back Jonny Bairstow by a slider. The batsman was dismissed for a naught. The next victim of Axar was Zack Crawley. Zack was playing well until he reached his half century. Just like Bairstow, Crawley was dismissed LBW by a quick one from Patel.

Stokes was the third wicket of Patel. He too failed to judge the line of the ball and was found plumb in front of the wicket. Axar then bowled Archer by an absolute beauty giving him his 4th wicket.

Patel completed his fifer when he dismissed Broad and then gobbled up the wicket of last man Ben Foakes to roll over England for just 112 runs.

Watch the moment when Axar got the last wicket – :