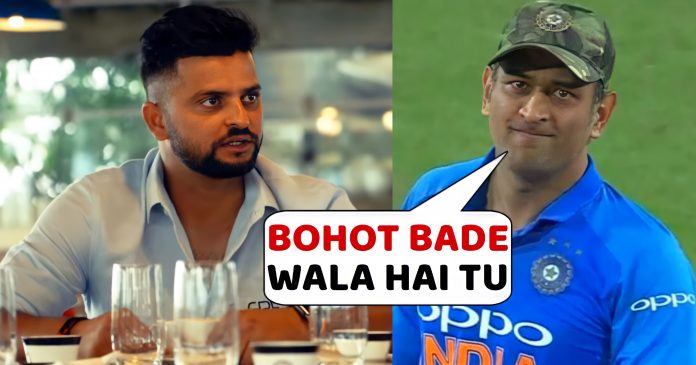 Suresh Raina and Mahender Singh Dhoni have been one of the most successful duo of Indian cricket in limited overs format. Together they forged many a partnerships which won the match for Indian team. Not only in international cricket, they repeated the same in IPL as the duo formed the backbone of Chennai Super Kings in IPL. Their repeated heroics was the reason Chennai dominated the IPL so much in its first 5 years.

Both the players debuted within 6 months of each other and retired from international cricket on same day. While there can not be any comparison of the two players, as a duo they were one of the most dependable for India. Furthermore they were great friends off the field which reflected in their understanding of each other game and running between the wickets.

Just like there is always a bit of banter and taunts between two friends, Dhoni-Raina were no different. They too had their fair share of conversations in which they pulled each other legs. Recently Suresh Raina appeared in a YouTube chat show on which he shared two funny incidents involving him and Dhoni.

In the year 2016 and 2017, Chennai Super Kings was debarred from participating in the IPL. Hence both Dhoni and Raina played for different teams in the two seasons. While the latter played for Gujarat Lions and was its skipper, the former played for Rising Pune Super Giants.

So when the two teams clashed with each other, funnier taunts was bound to happen. Talking about one similar moment, Raina said –

“I remember we were playing in Rajkot and, Ashwin was bowling’ McCullum was at the non-striker end; I was batting; Dhoni bhai was keeping; Faf du Plessis was standing at first slip. It felt like we were playing the Kanga League of my neighborhood! (chuckles)… When I went in to bat, Dhoni bhai said, ‘Aao aao captain sahab, aao’, and I said ‘Aare hai are hai bhai, zara peeche ho thoda!’ (I am coming brother, move aside first!). This was all very fun”.

Furthermore Raina remembered one funny incident in which he pulled the legs of Dhoni. It was an international game between India and Ireland.

“We had gone to Ireland in 2018 and enjoyed ourselves there after the matches. Dhoni bhai carried drinks for me there. At one moment, he thought that I asked for a lot of gloves and bats, so he brought the whole kit bag to the ground and said: ‘Take whatever you want, don’t call me again’. I think I was batting alongside Rahul and we both had hit fifties. He (Dhoni) said ‘I won’t come again, it’s very cold out here’. (chuckles) I still said, ‘Do one thing, bring a grip as well’. And he replied: ‘Bohot bade waala hai tu, tu rukja, paani pi, mai leke aata hu’. So it was that kind of fun. I thought to myself that I’ll take full revenge that day”.