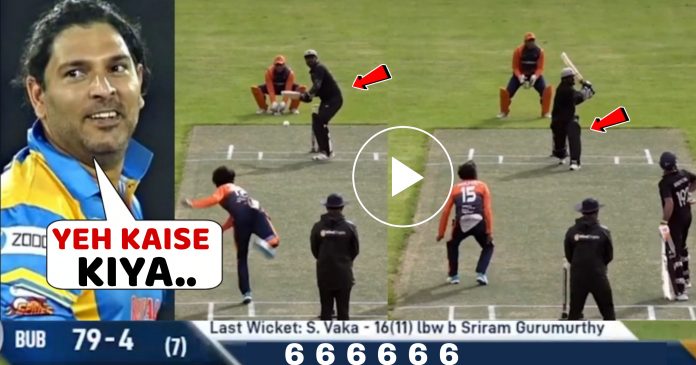 A batsman named Aritharan Vaseekaran became one of the few players to have hit 6 sixes in an over in recognised cricket. The right hand batsman is 34 years old and was playing a T10 game in European cricket league. The moment came in the 5th over and the hapless bowler was Ayush Sharma, who is a spinner. 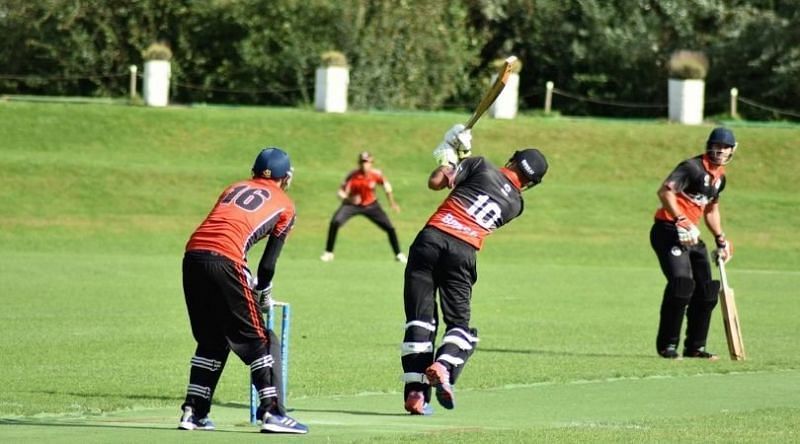 The first ball of the over was in the hitting zone of batsman. Hence, he went down on a knee and thumped it over mid wicket for a huge six. Second delivery of the over was short of a length and was pulled mercilessly over cow corner for another maximum.

On the third ball, the batsman came down the track and smoked it again over wide long on for 3rd six in as many balls. Fourth ball of the over was again carted disdainfully over square leg for another huge six.

The bowler decided to go round the wicket for the fifth ball. However, it made no difference to the end result. Vaseekaran bashed it over fine leg for fifth six of the over. It was a short delivery and the batsman hoicked it for maximum. Consequently, it appeared that the poor bowler had given up, while he ran to bowl the last ball of the over.

All he could bowl a juicy half volley and the batsman was waiting for it. He lined up and punished it over long on for 6th six of the over. Moreover, with that six, he completed his 50 in just 20 balls.

Talking about the match, it was a game between Bayer Uerdingen Booster vs Koln Challengers. Additionally, this contest is a part of European Cricket Series – ECS T10 Krefeld. It started from 7th February 2021 and 24 teams will be participating in it.

The 24 teams are divided into 4 groups of 6 teams each. There will be a total of 120 matches in the competition. The reason behind this cricket league is the promotion of Cricket as a sport in European nations, where the sport is yet to be taken seriously. These round of matches are being played in Krefeld, a small city in North Germany. Similarly, the games keep shifting to a new European country after a set duration of time and fixed number of matches. It is being done so that every European countries become familiar with the game and the local populace invokes interest in the game.

Watch the over of the 6 sixes here:

Aritharan Vaseekaran has just hit Ayush Sharma for six sixes in an over in @EuropeanCricket ECS T10 – Krefeld!