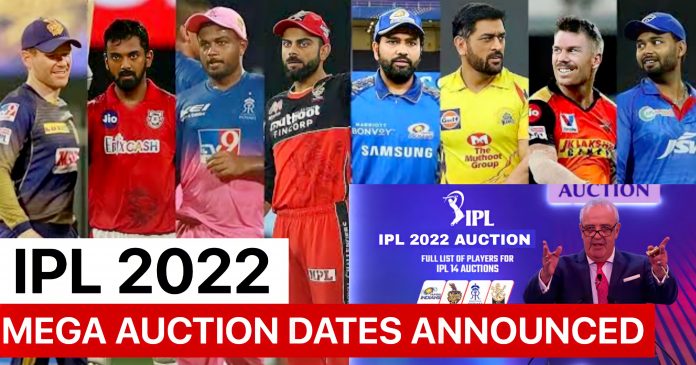 The Board for Cricket Control in India has announced dates for the mega auction of the lucrative Indian Premier League. This auction is going to be held in December 2021 ahead of the IPL 2022. There are going to be a lot of changes in the marquee tournament with BCCI adding many new points to the rule book of IPL.

New things to be added from the IPL 2022 will be the introduction of two new teams. Also there would be increase in salary purse of the players. Moreover there will be new rules regarding player retention and media rights. Hence that could change the dimensions of Indian Premier League.

The biggest news to come have out of the BCCI official channel is the introduction of two new IPL teams ahead of season 2022. This will increase the number of teams in the tournament from eight to ten. The last time it happened was in 2011 when there were 10 teams in the season. They were divided in 5 teams of 2 groups each as a total of 74 matches were played in the season. However the original format of 8 teams was returned from 2014.

With BCCI all set to re introduce the format of 10 teams, one can expect similar rules and regulations like 2011.

Salaries of players to be increased!

In a great news for the professional cricketers who play in the IPL, their pay cheques are going to get increased. The salary purse which currently stands at 85 crores per team will expand by 5 crores every year till 2024. Thus in 2022, the total salary purse will be 90 crores per team, 95 crores in 2023 and a whopping 100 crores by 2024.

There are new regulations for the retention of players prior next season of the IPL. From next season, teams will be able to retain 4 players from their team. One interesting point in this is that the teams can only retain a maximum of 2 overseas players. Consequently the salaries of these players will be deducted from the team’s purse. Accordingly the reduction will take place before going for the mega auction.

The addition of two new teams will no doubt expand the length of the tournament. Hence BCCI has opted for fresh media rights on both TV and online stream. It is assumed that with more matches in the IPL, BCCI may earn close to 25% more on the previous media rights.

Watch : Unbelievable huge six hits by Ishan Kishan on 1st ball in his...