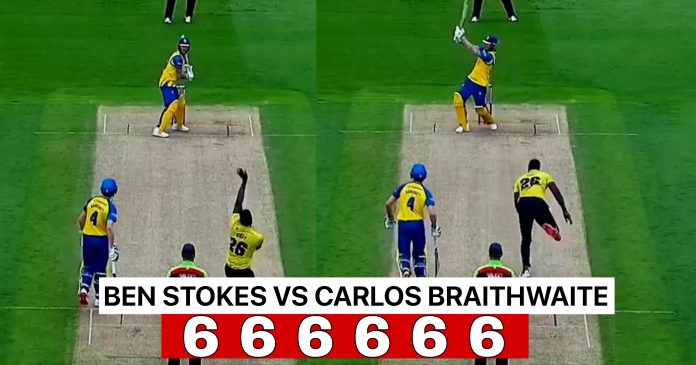 ” Remember the name” is one of the most iconic statement ever uttered by a commentator. The backdrop of these words contains a nerve wrecking final between two big hitting teams. It was the final of 2016 T20 World Cup held in India. The hosts were dumped out in the semi final by West Indies where they met England. It was Eden Gardens, Kolkata where where the final was held.

England batted first and made 155-9. It was a low score considering the monster hitters from West Indies. However, English bowlers pulled back their team and kept picking the wickets at regular intervals. Hence, by the time last over arrived, West Indies still required 19 runs to win with 4 wickets in hand.

On the crease was Carlos Braithwaite and for England, the bowler was Ben Stokes. Both were all rounders of their respective teams and only one could have emerged victorious. The next 4 balls were a stuff of folklore as the batsman pummeled, thrashed and bashed Stokes into dust with 4 sixes.

By the time Carlos hit his fourth six, Ian Bishop screamed from the mic in delight which was ” Remember the name”. He was all praises for his country mate Braithwaite who was still an unknown commodity till then.

Stokes has his revenge, Finally!

5 years after the incident, Ben Stokes got the chance to go level with Carlos Braithwaite. The brilliant English allrounder who was just a rookie till then, is now one of the finest cricketers of the game. Hence, it was just a matter of time before he could take his revenge against Braithwaite.

The moment arrived when Braithwaite bowled to Stokes in England local T20 competition. Stokes was playing for Durham and Braithwaite was with Birmingham. In the 6th over of the Durham innings, Stokes smashed the bowler for 2 sixes and a four, all over leg side. Consequently, 16 runs came off the over as Stokes managed to get one back on Braithwaite.

Needless to say, Durham won the match by 34 runs with stokes in rich vein of form. His quick 20 balls 35 propelled Durham to 164 and then stopped Birmingham to just 130 runs. Stokes delivered with the ball as well by picking up 4 wickets.