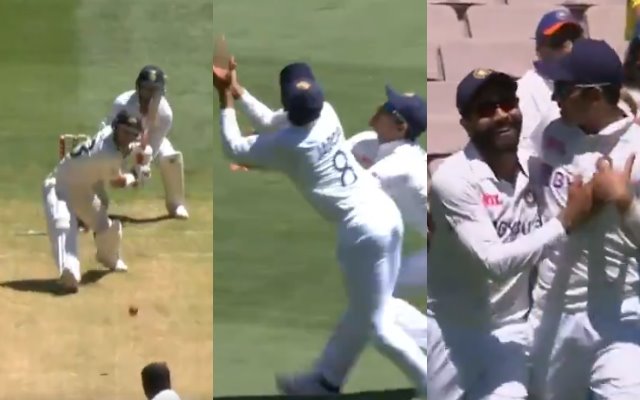 India have won the second test in Melbourne in some style. One of the key factors that attributed to this historic victory is their fielding.

After dropping plethora of catches at Adelaide, India came back strongly with proper fielding at Melbourne. They rarely dropped a catch and looked very sharp on the field. Meanwhile, Australia reversed the role and dropped many chances.

India dominated the test right from the start. The bowlers hit the right lengths on consistent basis and made life difficult for Aussie batsmen. The absence of Virat Kohli was not felt, as Rahane stepped up to the task.

The skipper managed to score a match winning century in the first innings. He along with Jadeja ensured that the team got a considerable lead. Australian batsmen were not aggressive enough and couldn’t find easy runs.

Whenever they tried to up the ante, Indian fielders took some catches to put them on the backfoot. Ravindra Jadeja was the pick of the fielders once again as he took brilliant catches.

He dismissed Wade by running sideways and avoiding collision with Shubman Gill. In the second innings, he also caught Cameron Green at short mid wicket by plucking the ball out of thin air. Traditionally, Melbourne is one of the toughest venues to win against Aussies in test matches.

But India cruised through to an easy win. They dominated the entire game and came over the brain fade moments in Adelaide Oval. The action now moves to Sydney and it is going to be an even contest.

SCG is the most sub continental pitch that you could get in Australia.  India have always played well in Sydney but Australia will look to comeback after a hurtful test loss.

Here are some extraordinary catches from Melbourne Test

Meanwhile, Indian medical staff are working to get Umesh Yadav fit for the third test. The pace bowler suffered an injury during the second innings and pulled out of bowling.

Although, other bowlers stepped up to the occasion, it will be tough on the bowling unit in Sydney. Should he fail to be fit, young Navdeep Saini will most likely make his debut. Indian pace bowling unit needs the experience of Yadav especially since Shami and Ishant are not available.