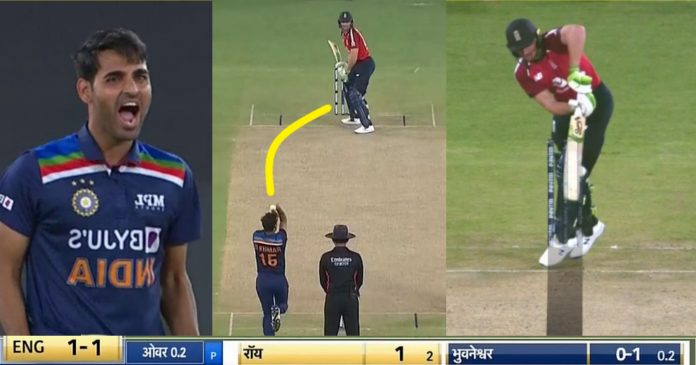 India are England are up against each other in the second T20 in Ahmedabad. Skipper Virat Kohli won the toss and have decided to field first. India are playing with two debutantes in this game. Surya Kumar Yadav and Ishan Kishan are a part of Indian team for the first time. Shikhar Dhawan and Axar Patel are rested for this game.

After losing the first game, India are under pressure to win the match. The two changes means that India have bolstered their batting and added players who can score freely and hit the big ones from ball one.

In the last game, Indian batsmen got bogged down in the last match. To counter that, India have given the cap to Ishan Kishan who is an explosive batsman. He can hit out from the first ball itself. Also, Surya Kumar Yadav has now performed consistently over the last few years in IPL and List A cricket. The IPL 2020 was a stellar season for him where he made runs at an average of 55 and a strike rate of 140.

For India, Bhuvaneshwar Kumar bowled the first over to Jason Roy and Jos Buttler. Roy took a single on the second ball of the over giving the strike over to Buttler.

In the last game, Jos Buttler had taken Bhuvaneshwar Kumar to cleaners. He had smashed him to all parts of the ground. That thing was definitely on the mo9nd of Buvaneshwar Kumar when he bowled to Buttler.

However, this time the things panned out differently. The bowler bowled a fuller length delivery to Buttler who played all around it. He tried to work it towards the leg side but in the process the ball bit his pad. As soon as the appeal went to the umpire, he immediately gave him OUT.

That was so plumb a decision that Buttler did not bother to take a DRS. England had lost their first wicket in the first over itself and Bhuvaneshwar had his revenge from the previous game in style.

Watch the video of that moment here:

Watch : Funny dismissal of Taijul Islam. Gets bowled as his Shoes slips