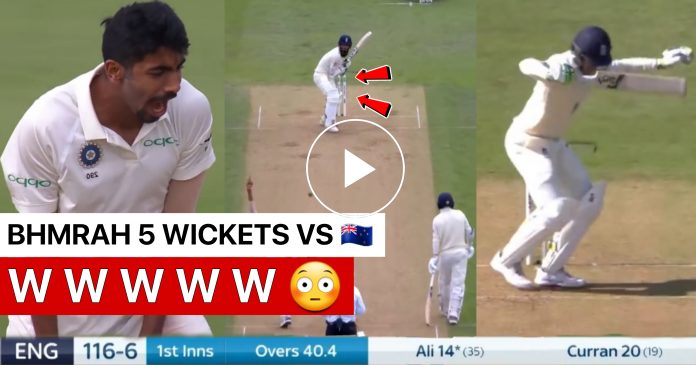 Jasprit Bumrah is possibly the best Indian pacer in the circuit, across formats. In all the three formats, Bumrah gets the job done expertly for his captain and the team. From delivering Yorkers in limited overs cricket to swinging the ball both ways in test cricket, Bumrah has all the skills necessary to become a fast bowling superstar.

This post is about a flashback when Bumrah turned the game around for India. India was touring England in the season 2018 and it was a test series of 5 matches. The hosts had absolutely dismantled India in the second test. Moreover, they had won the first test as well and were leading 2-0, going in the third test.

India had to win the third test in order to stay alive in the test series. Another loss meant that Indian team would lose the series. Then, came Jasprit Bumrah.

The test was played at Nottingham. Winning the toss, India batted first. On the back of a spectacular 97 runs by skipper Virat Kohli, India managed 329 runs. In reply, England were shot out for 161 runs as Hardik Pandya became unplayable with his seaming deliveries. He picked up a career best 5-28.

Getting a lead of 168 runs, India were positive in their second innings. Virat Kohli once again was the top scorer for India with a brilliant century as they declared at a total of 352-7. In the fourth innings, the target for England was set at 521.

After Ishant Sharma struck twice with the new ball, it was the turn of Jasprit Bumrah to weave his magic. He started the proceedings by sending Joe Root back to the pavilion. It was the 25th over of the innings and Bumrah bowled a wide and shortish delivery.

Root decided to play at the ball, as it took the outside edge and settled in the hands of KL Rahul, in the slips.

His second wicket was of centurion Jos Buttler. He was caught in front of the wicket when he left an incoming delivery, as the ball rammed in his pads. Consequently, Buttler was instantly given out.

On the very next ball, Bumrah smashed the defences of Jonny Bairstow with a peach of a delivery. It was a ball that held its line and Bairstow was beaten neck and crop. He was gone for a golden duck.

Chris Woakes was too easy a target for Bumrah as he bowled a bouncer to get the better of him. Hence, it was directed at his head as he tried to defend it. But, the ball took his edge and was taken by wicket keeper Rishabh Pant.

Bumrah’s fifth wicket was of another fast bowler Stuart Broad. The delivery was an out swinger as Broad tried to drive it. Hence, the ball kissed the blade of him and went straight into the hands of second slips. KL Rahul again didn’t make any mistake and grabbed the opportunity.

Jasprit Bumrah finished with figures of 29-8-85-5 as India won the match by 203 runs. Consequently, they stayed alive in the series by winning the game and making it 1-2 before going in the fourth test.

Watch the highlights of Bumrah’s bowling.