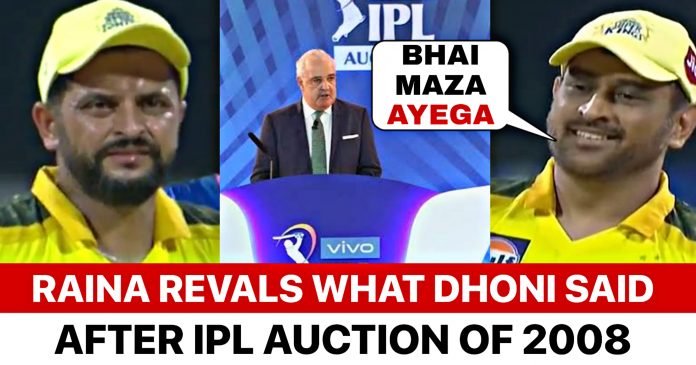 Suresh Raina and MS Dhoni are not only team mates but one of the best friends, on and off the field. The two started their international career within months of each other. Dhoni made his debut in Dec 2004 while Raina had his debut few months later in 2005. While Dhoni career went upwards since his debut, Raina had a start stop career.

A lot of people believed that Suresh Raina had a great potential to be a quality test batsman. Unfortunately, he could not succeed in test matches. Raina had the unique ability to finish games in limited overs cricket. Moreover, it was on display many a times during his career. In the end, he finished his career with close to 5600 runs in ODI cricket and 1600 runs in T20 cricket.

Such great was the bonding between Dhoni and Raina that both of them retired on the same day in 2020, which was the 15th of August. After the retirement from the Indian team, both were seen in IPL this time. Both of them did not look at their best in the games played, but who knows what could have been had the IPL not got postponed.

Brotherly bond between Raina and Dhoni

Recently, Raina has written an autobiography which is titled “Believe – What life and Cricket Taught me”. In his book, the southpaw shares a funny incident that signifies the relation between Dhoni and him.

It is related to the auction for the first season of Indian Premier League. ” The IPL auctions happened, and like every other cricketer in the country, I was waiting eagerly to know which team would I be playing for. I was elated to go to Chennai Super Kings. It meant Mahi Bhai and I would be playing for the same team. I heard from him almost immediately after I was bought in the auction”. “He said – Maza aaega dekh” – Recalls Suresh Raina in his book.

Then Raina further goes on and writes that ” There was a lot of attention on him, of course. And looking at some of the other figures whom Chennai had bought – Matthew Hayden, Muttiah Muralidharan and Stephen Fleming – I was just delighted to be in the same team as them. The IPL strengthened my bond with Mahi Bhai even further”.

The book will hit the bookstands on 24 May 2021. It is co authored by Suresh Raina and sports author Bharat Sudaresan. Moreover, it will be published by the reputed publishing house, Penguin India.