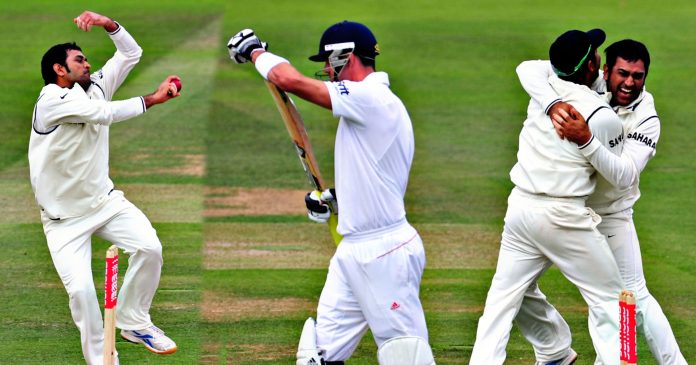 The name MS Dhoni is synonyms with greatness in India’s cricketing circle. His insane match finishing abilities was out of this world. The way he muscled sixes with helicopter shot and his lighting fast stumpings was a treat for Indian fans. His brilliant captaincy helped India win all three ICC tournaments and he is the only captain to do so.

But this article is about not Dhoni’s wicket keeping or batting abilities and skills but about his bowling when he almost took his first and only test wicket. However, this wasn’t the case as the batsman Kevin Pietersen took the review only to save himself from getting out.

India travelled to England for a 4 match series. England was badly outplaying India in this tour. In one of the game, Dhoni was so frustrated by the bowling effort of his bowlers that he took the keeping pads off and brought on himself to bowl!

For England, Kevin Pietersen and Ian bell were batting. KP was well set at 78 and was batting nicely. The first ball MS bowled to KP, it came back in sharply as KP missed his swipe and the ball rapped him on the pads. The appeal, however was turned down.

The next ball, Dhoni bowled the same length and this time KP tried to drive it. The ball missed his attempted drive, went behind him and the stand in keeper Rahul Dravid caught it. A vociferous appeal of a caught behind was adjudged as out!!! MS Dhoni had his first test wicket!

However, this celebration proved to be short as the batsman reviewed it instantly. On the review, it was found that the ball had missed his edge by a whisker and it was the sound of bat hitting the pad which the Indian fielders had wrongly interpreted as an edge off the bat. This was one moment which will always be related to MS Dhoni!

Years later in IPL 2017, Dhoni even taunted KP about him being his first test wicket while he was keeping and Pietersen was doing commentary in a comical stuff.

You can watch this one incident, here-: