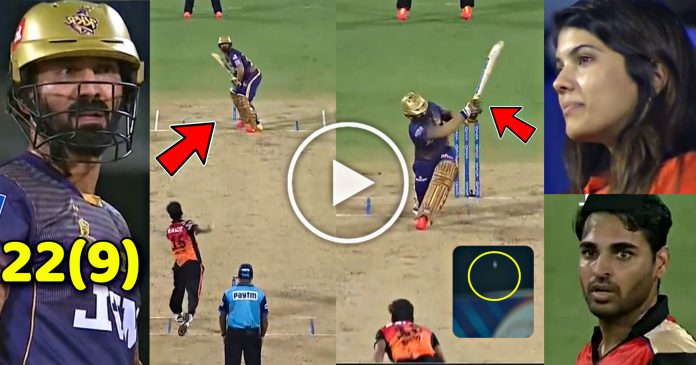 Kolkata Knight Riders and Sunrisers Hyderabad are, up against each other at Chennai. Batting first, Kolkata made 187-6 in 20 overs. After losing the toss, and being asked to bat first, they had an amazing start. The team fifty, came in powerplay itself. Nitish Rana looked good, right from the start. He started his innings, with a boundary.

Rana and the number three, Rahul Tripathi then carried on, with the hitting. The duo added 93 runs in 50 balls, and punished the Hyderabad bowling. Both, of them completed their respective half centuries, at rapid strike rates. However, Tripathi fell soon after completing his fifty. He was dismissed by T Natarajan, for a score of 53 runs in 29 balls.

Then, Kolkata suffered a mini collapse as, their powerful middle order was tied down, by strong Hyderabad bowling. Andre ‘Muscle’ Russel missed out, on his hitting as Rashid Khan got the better of him. The batsman, tried to hit a six but totally mistimed the shot as Manish Pandey, took a good catch sliding forward at long on.

In the next over, Nitish Rana and Eoin Morgan, both were sent back to the pavilion in successive deliveries. Mohammad Nabi dismissed them but, missed out on a hat trick as Dinesh Karthik, safely played him.

After loss of 3 quick wickets, the run rate of Kolkata, took a beating. A score, which looked to be going, more than 200 was suddenly in danger of being, restricted under 180. That, is until Dinesh Karthik intervened, and played a lovely cameo for his team.

Karthik hit a 9 ball 22 which had 2 fours and a six. However, even in his brief stay of 9 balls, he played a stunning shot that forced people to stand up and take notice. It was the last over and Kolkata needed some quick runs to pass 180. Karthik took the onus of that on himself.

The first ball of the over was a bit wide, outside off from Bhuvi Kumar. Karthik, quickly identified the length, went down on one knee and played, a stunning scoop shot for a six over, backward square leg. Such, was the audacity of the shot that, Bhuvaneshwar Kumar could not quite believe it, and shook his head.

The shot made sure that, Kolkata would pass 180. They eventually finished at 187-6.