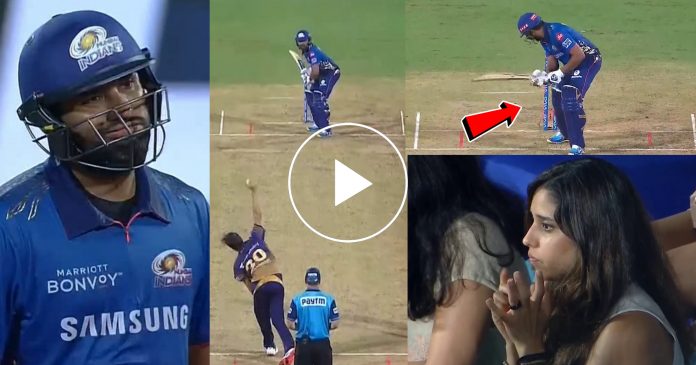 Rohit Sharma missed out on his fifty in the ongoing match vs Kolkata Knight Riders. The skipper of Mumbai Indians made a well crafted 43 runs in 32 balls. It included 3 fours and a six. He looked set for a big score when his innings was cut shot when he was dismissed by Pat Cummins. The world’s number one test bowler from Australia got the better of him when he bowled Rohit.

Earlier, Rohit and De Kock opened the innings for Mumbai. The Mumbai skipper was watchful in the first over of Harbhajan Singh. He got his first boundary in the second over when he found a four by pulling Varun Chakravarthy. His second four too came off the same bowler in the next over. This time, the bowler was swept over square leg for a four.

His first and only six came against Prasidh Krishna. The bowler bowled a short ball which is bread and butter for Rohit. He casually pulled him for a six! Chakravarty again was on target of Rohit in the next over when he was carved over short fine for his third four.

Rohit gets out at wrong time

Just when Rohit was looking dangerous and getting in that beast zone, Pat Cummins came to bowl in the next over. On the second ball of the over, Cummins bowled a short and wide but not by too much margin. Rohit tried to cut it but the ball came slowly after hitting the pitch and the batsman was a bit earlier in the shot.

Needless to say, he mistimed it and the ball just met the edge of the bat and crashed into his stumps via an inside edge. Consequently, Rohit was clearly frustrated by the shot. He was disappointed by the shot as well and had his head hung down.

Meanwhile in the dressing room, his wife Ritika Sajdeh too was seen quite emotional after she saw the wicket of Rohit. When the camera panned at her, she had her eyes quite moist. Just like every fan of Rohit, she too wanted to see him getting to fifty but, that could not happen.