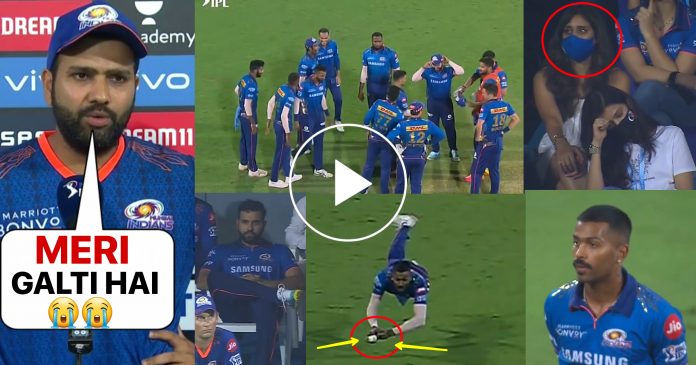 Rohit Sharma had a mixed day in today’s match against Delhi Capitals. The Indian opener was the highest scorer for his team Mumbai Indians as he made 44 runs in just 30 balls. He hit 3 sixes in his stay at the wicket. But like the previous matches, Rohit could not play a longer innings and was dismissed when he was set.

This was the reason that his team could not score big and managed only 137-9 in 20 overs. After that, Rohit got injured and had a small niggle that forced him to stay outside the ground when Delhi were chasing the total of 138 runs.

After the match, Rohit was asked about this and what did he made of his side’s loss against Delhi.

Rohit replied – After the start they got in the powerplay, they should have made more runs that what they eventually managed to do. He claimed that they should have batted with more responsibility in the middle overs where the team lost the plot. He then gave the credit to the bowlers of Delhi for maintaining pressure throughout the innings of Mumbai.

This pressure was the main reason of Mumbai losing wickets in the middle overs and settling for an under par score.

Rohit then talked about the role of dew and its effects. He says that he knew the dew was going to come in. They saw it in the last few games. But, it is not that difficult to grip the ball with the amount of dew. Then he conveniently declares that Dew is not really the factor as teams made it out to be.

Finally, Rohit says that as a team, they just need to play smart and basic cricket to win the match. All other things are false and over rated.

Rohit also discussed the extent of his injury. The answer of Rohit would surely bring smiles to the fans of Rohit and Mumbai Indians. He said that the injury is not too dangerous and it is just a niggle. It should be okay in a couple of days. There is nothing to worry about it.

Watch the statement of Rohit here: