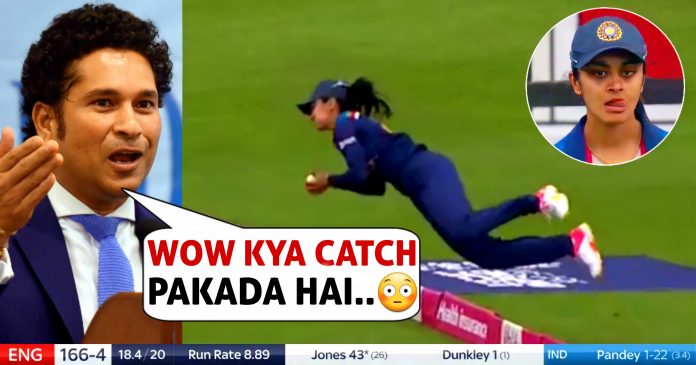 The social media is going Ga-Ga over Harleen Deol’s catch which she took yesterday vs England. A stunning fielding effort which would give a run for money to even the best of fielders, Deol was truly outstanding. The way she defied the gravity while taking the catch was nothing but a stuff of dreams. Hence the video of it has truly set the Internet in fire.

Indians are loving the effort and the catch of Harleen Deol. Even the people who aren’t necessarily fan of cricket, are also sharing the clip with generous appreciation message for the 23 year old cricketer.

OMG 😱 🤯🤯@imharleenDeol take a bow!! Calling it now the best we will see this series!! pic.twitter.com/O4Dwm4OYlU

That was a brilliant catch @imharleenDeol. Definitely the catch of the year for me!pic.twitter.com/pDUcVeOVN8

As good a catch one will ever see on a cricket field, from Harleen Deol. Absolutely top class. https://t.co/CKmB3uZ7OH

Out of 10, how much would you rate this epic catch by Harleen Deol? ❤️🇮🇳#ENGvIND #HarleenDeol pic.twitter.com/E07ptipieP

A fantastic piece of fielding 👏

However for the Indian team this match proved to be forgettable. They lost the match by 18 runs on DLS calculations. Chasing a target of 178 runs, India had reached 54 for 3 in the 9th over when rain intervened. After continuous downpour the match was called off. Moreover the Indian team were 18 runs behind the DLS par score. Hence England were adjudged the winners of the match by 18 runs. They go 1-0 up in the series of 3 games.

Earlier England had made 177 runs in their 20 overs. The player in form Nat Sciver made 55 runs and was the top scorer for her team. She took just 27 balls to hit those runs. The wicket keeper Amy Jones too cracked a 27 ball 43 runs and was looking all set to complete her fifty. Interestingly she was the batter whose catch Harleen Deol took and lit up the ground.

The English batter Nat Sciver was adjudged the player of the match. Second t20 game between the two sides will be played on 11 July at Hove followed by the third T20 game at Chemsford. Moreover India will look to bounce back in the series by winning the second match vs the hosts.