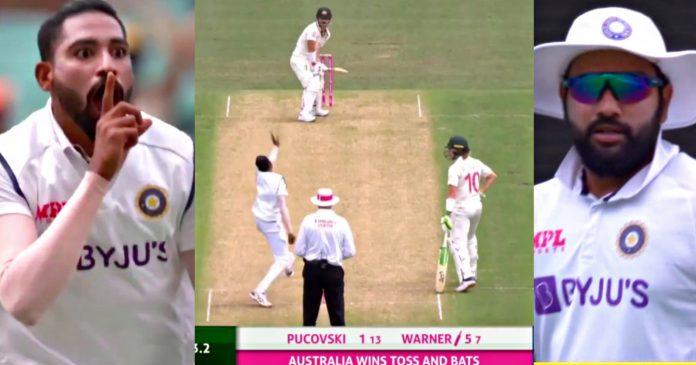 Mohammed Siraj has been a revelation for India in the recently concluded Border Gavaskar Trophy. Not many have expected him to have such an impact for India in their historic series win.

After the injury to Mohammad Shami in the first test, Siraj got his chance in Melbourne test. He grabbed the opportunity with both his hands as he made immediate impact in the boxing day test match.

He dismissed dangerous Marnus Labuschagne and Cameron Green as his first wickets in test cricket. Siraj then went onto pick three more wickets in the second innings and played important role in Melbourne win.

Siraj once again bowled tight lines in Sydney and impressed. But it was at Brisbane where he impressed the most. In the absence of Jasprit Bumrah, Siraj was the spearhead of Indian bowling unit but that did not tame him at all.

In fact he looked at his best during the final test and picked up his maiden 5 wicket haul in test cricket. He ended the series with 13 wickets from three tests making him the highest Indian wicket taker ahead of Ravichandran Ashwin and Jasprit Bumrah.

Here is every wicket of Siraj

It was a brilliant effort from Siraj as he was only playing his first ever test series. On the other hand, he also lost his father after he reached Australia. But the 26 year old did not comeback to India.

He stayed with the team and continued working hard in practise sessions. Eventually he got his chance and he made the most out of it. After his impressive performances in Australia, the selectors drafted him into the squad for the first two tests in the upcoming home series against England.

It will be interesting to see the team composition for the first test as there are many worthy candidates. India are set to face England in a four match test series starting February 5. The hosts will be firm favorites as India lost only one test match at home in the last 8 years.

Siraj had a breakthrough year at IPL 2020 and continued his exploits in Australia. He can only go up from here and all the fans are hoping to see more of him in Indian jersey.