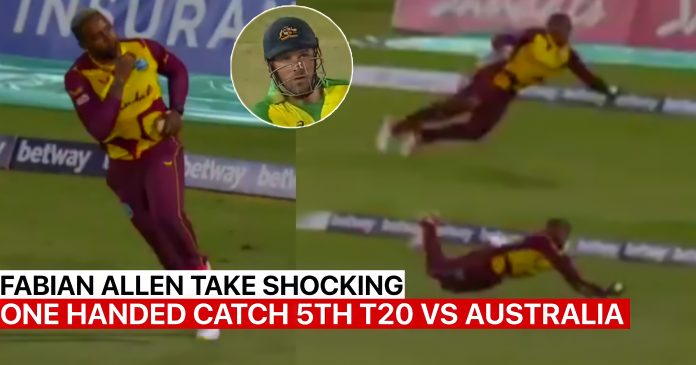 West Indies beat Australia by 16 runs in the final T20 match to win the series 4-1. The home team had already sealed the series by winning the first 3 matches. It was only due to a brilliant last over by Mitchell Starc in the fourth T20 that denied West Indies a victory and a chance of whitewash. However they made no mistake in the final match and ended the series on a high.

The hosts batted first and smacked the Aussies to all parts of the park. Ewin Lewis the left handed opener was brutal in dealing the opposition bowlers. It was raining sixes with his bat as he hammered 9 maximums in just 34 deliveries. The southpaw looked all set to reach his century but was dismissed at the score of 79 runs.

Chris Gayle played a cameo which lasted just 7 balls. However it still fetched him 21 runs at a strike rate of 300! Nicholas Pooran chipped in with 31 of 18 balls that included 3 sixes. Other than these three batsmen, all the West Indians struggled. Hence a score which looked to go in excess of 230 was stopped at 199.

Chasing a total of 200 runs to win, Australia got off to a poor start. They lost the young opener Josh Philippe for a duck. The number 3 Mitchell Marsh and skipper Aaron Finch kept their team in the hunt with some attractive stroke play. However once Marsh was dismissed, Australia lost the way.

A stunner from Allen!

In the end Australia could only manage 183-9 in 20 overs and conceded the match to West Indies.

Amidst all this, one particular moment happened which went viral. It was the wicket of Aussie skipper Aaron Finch which broke the back of tourists batting line up. In the 10th over of the innings Hayden Walsh was bowling to Aaron Finch. The leggie bowled a low full toss which the batsman tried to send over long on.

However he could only get the toe end of the bat as the ball went low towards long on. The fielder at that position was Fabian Allen was a bit far from the ball. Hence he came running towards his left and dived full length to take the catch inches of the ground. Moreover he took it single handedly which stunned everyone present in the ground.

Watch the video of the catch here

What a catch from Fabian Allen pic.twitter.com/w5F042PlSe