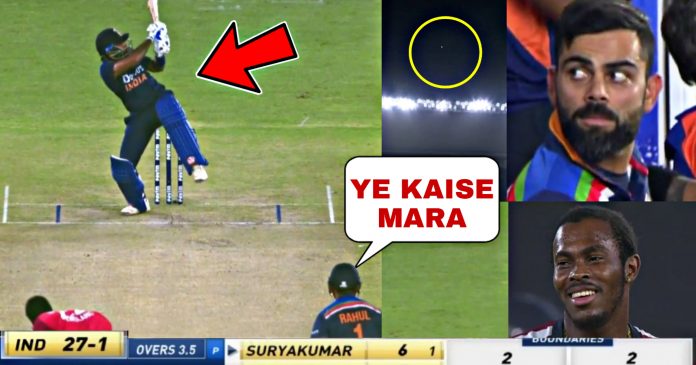 Surya Kumar Yadav has performed consistently in domestic cricket and IPL in the past few years. His immense consistency gave him the belief that sooner or later, he would be a part of the Indian team. However, he was constantly overlooked by the Indian selectors.

After a stellar IPL season, it was expected that his name will be included in the Indian team for Australian tour. But, he could not win the faith of selectors and wasn’t selected in the team. However, after much patience, Surya Kumar Yadav or SKY got a chance in the Indian team vs England.

SKY got his chance to make a debut in the second game but did not get to bat as India won convincingly. In the previous game, he was not given a place in the playing 11.

This time, Yadav was in the team and got his chance to bat at number three. After waiting for so much of time, it was like a dream come true for the batter. Immediately, he made sure that he is a man cut out for international cricket, at least in t20’s.

Surya hits a SIX on the first ball !

The first ball Archer bowled to Surya Kumar was a short pitched ball on the leg stump. However, Yadav moved inside the line and absolutely nailed the pull shot flat over fine leg for a six! It was a sensational blow by the 30 year old debutant. This was the first ever instance by an Indian batsman to hit a six on first ball of T20 cricket.

Carrying on his innings from there on, Yadav played some eye catching strokes. His six to Sam Curran like ABD was an amazing shot. He sat down on his knees and scooped the ball over square leg for a six.

Yadav completed his fifty in just twenty eight balls. It contained six fours and two sixes. However, after completing his fifty, he was soon dismissed. He made fifty seven in just thirty one balls before being adjudged OUT in an unfortunate way by the third umpire.

Yadav might have got out after his fifty, but his innings and stroke play showed that he is here to stay for a long period of time.