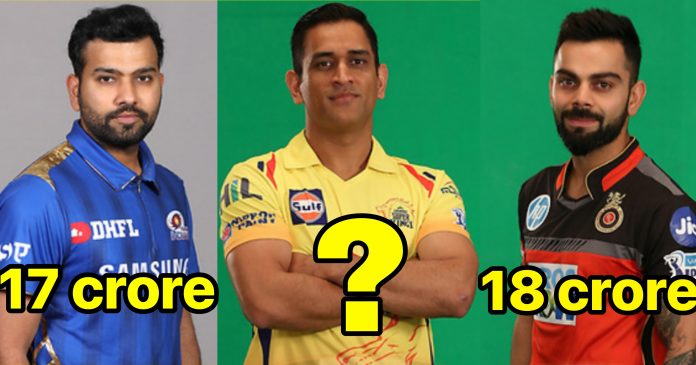 The 14th edition of Indian Premier League, is set to begin from 9th of April. Its unarguably the, richest cricket tournament in the world. Not only in cricket, IPL is amongst the top echelon of leagues with the most money. Hence, It is not too far behind the lucrative leagues like English Premier league of Football, the NBA of Basketball and Formula one of Car racing.

Since, the IPL has no shortage of money, the players involved in it are also paid generously. One season of a month and a half of IPL, can be monetarily as rewarding as match fees after playing, whole year of international cricket! This is the reason the best players, of the world flock to play IPL, sometimes even at the cost of playing, for their national team.

Good performances in the league rightly earns the player, a huge amount of money. His stature as a sought after athlete, can multiply his base price by ridiculous margins. Generally, the best player of any team is made the captain of the team. Moreover, in all likelihood, he would be the most expensive player of the team.

5) KL Rahul : 11 Crores – The right hander from Karnataka joined Kings 11 Punjab, in the season 2018, for a sum total of 11 crores. He not only became the captain of the team, but also kept wickets for them and opened for his team.

4) David Warner : 12 Crores – Vice captain of Australia and an explosive opener, Warner earns a salary of 12 crores per season from Sunrisers Hyderabad. He captains his side and scores quickly, at the top of order. Also, he is one of the most consistent batsman, of the IPL. The south paw has multiple 50’s to his name, in the tournament.

3) MS Dhoni : 15 Crores – The legendary finisher and keeper from India, also now retired, pockets a plum amount of 15 Crores, every year from Chennai Super Kings. Dhoni has been a regular for the franchise, every year and has been captaining it since 2008. Under him, Chennai has won 3 IPLs and has reached the finals, a record 8 times.

2) Rohit Sharma : 17 Crores – Local lad Rohit Sharma is the skipper, of his home team Mumbai Indians since 2013. In his very fist season of leadership, Mumbai won the trophy. Since them, Rohit had led his team to 5 IPL trophies, making it the most successful team in history of IPL. No wonder, he receives a payout of 17 Crores every edition in IPL.

1) Virat Kohli : 18 Crores – The Indian captain Virat Kohli is the highest paid player, and captain of the IPL. His salary is a massive 18 Crores, in one single season of IPL. He is the only player, to have played for the same team every year. Also, he has been a part of Royal Challengers Bangalore since the inception, of IPL in 2008. Kohli became the captain of RCB in 2013. In 2016, Kohli led his team to finals where they lost to Hyderabad. As a batsman, Kohli scored four centuries in the tournament, as he scored a record 973 runs in the season.