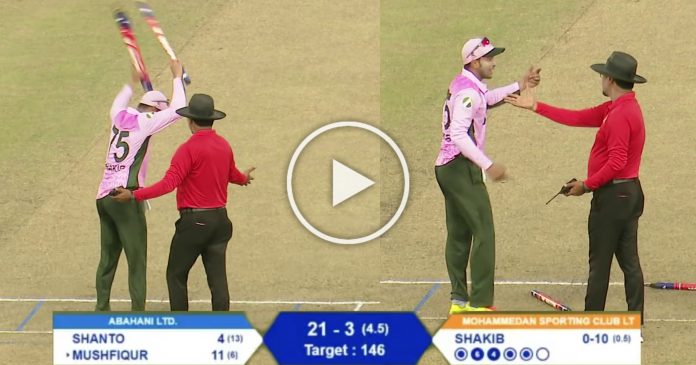 Shakib Al Hasan was caught in one more controversy as he lost his temper in a domestic competition of Bangladesh. The world class allrounder has time and again showed that when things go against him on a cricket field, his behavior becomes vulnerable. 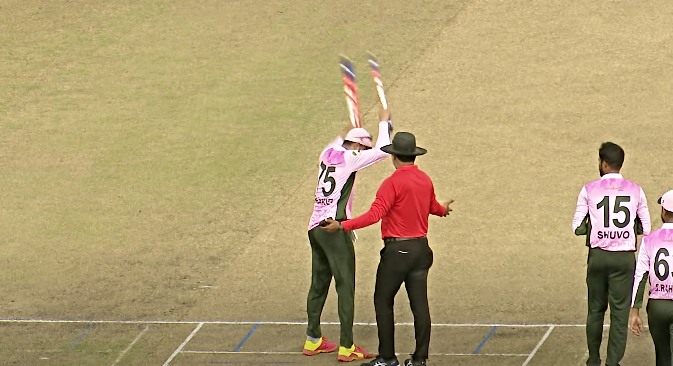 After having involved in controversies ranging from obscene gestures to non reporting of bookies in front of ICC anti corruption unit, Shakib added one more unfortunate incident to his name. This time he clashed with on field umpire and that too twice in two overs.

The match was held in Sher e Bangla stadium. Shakib was representing and captaining his side Mohammaden Sporting vs Abahani. On the first occasion, he appealed vociferously for an LBW against Mushfiqur Rahim. However, the umpire remained unmoved which left Shakib totally furious. Hence, he kicked down the stumps at non strikers end.

This was a shocking display by the premier Bangladeshi allrounder. However, this was just a trailer to what followed. In the next over, Shakib Al Hasan totally lost his cool and behaved like a club cricketer.

Just one ball was remaining for the power play overs of Abahani innings to finish. Right after 5.5 overs were bowled, it started to rain heavily. Consequently, the umpires called the play off to avoid any injury risk. This is when the captain of Mohammaden Sporting Club, Shakib ran in from mid off and started to miss behave with the umpire. He uprooted the stumps at non strikers end and threw it with all his might in to the ground.

As if this was not enough, he kept arguing with the umpires about the decision to call the play off. Hence, the incident became highlighted on social media and almost everyone criticised Shakib for his pathetic behavior.

After the match got over, Shakib issued an apology on his Facebook page regarding the issue.

Watch the full video of the incident here:

Watch : MS Dhoni races with a Pony in his farmhouse. Runs almost as...