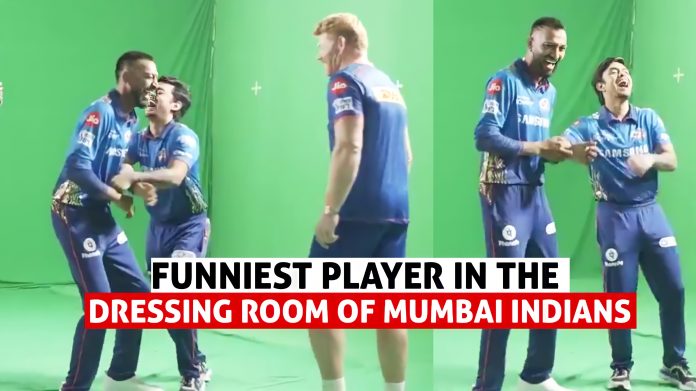 Mumbai Indians is the most successful franchise in the Indian Premier League. The team led by Rohit Sharma has won a record 5 IPL trophies and are defending champions for two seasons now. They didn’t win any trophy for the first 5 years. However that scenario changed once Rohit Sharma became the captain mid way through 2013. Since then Mumbai has won 5 of the 8 seasons of the IPL.

Recently Mumbai Indians shared a funny video. In this the players of Mumbai franchise are asked about who they think is the funniest team mate in the squad.

The first one to be asked the question was Chris Lynn. He replied “It would have to be Trent Boult, whether it is being serious or being sarcastic. I think we talk about positivity, he does that. It is never negative, it is always learning, sarcasm or having fun”.

Adam Milne was the next one who was queried about the same. To this he said – “It is probably Boulty. I’ve spent a lot of time around him. He’s got some great stories and he is a very animated storyteller which is often very funny”.

📹 Our cricketers reveal their funniest person in the MI dressing room 😋

Interestingly Trent Boult gave it back to Adam Milne when he was asked the same question. “I am going to have to say Adam Milne because I know him very well. He was a groomsman at my wedding so we obviously go back a long way. Moreover he has the knack of making me laugh somehow. I am sure you’ll see a smile on my face when I am around him”. Said Boult about his fellow New Zealander Adam Milne.

The choices of Indian players were a bit different through. Almost unanimously they all claimed that it was Ishan Kishan who should hold the title of being the funniest player in the Mumbai squad.

Surya Kumar Yadav said – “I think it has to be Ishan Kishan only. Even after the game, if it didn’t go our way he’s the guy who I like to be with at that time. Ishan, Krunal, Hardik, all these people are fun to be with after the game when the moment is not light at all”.

Rahul Chahar was of the same opinion – “Everyone knows Ishan Kishan is always goofing around. So I think it has to be him”.

Lastly Jayant Yadav shared the same feelings about Kishan – “It’s difficult to describe Ishan Kishan in an anecdote. I think the situational things that he does. He’s just witty”.