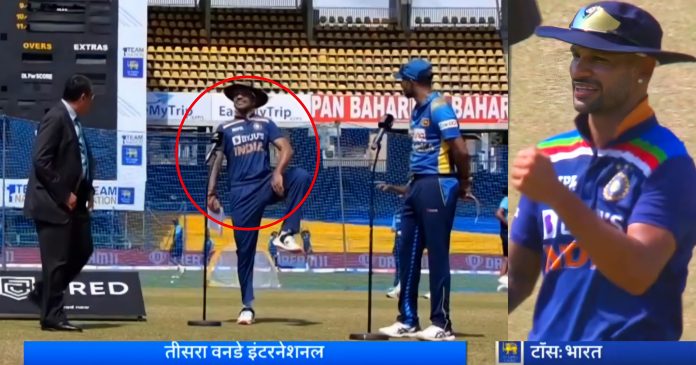 Third ODI between India and Sri Lanka is underway. India has already won the series by winning the first 2 games. Hence this series is inconsequential in terms of any impact. This is the reason India had as many as six changes to their side from the previous game. Ishan Kishan, Deepak Chahar, Yuzvendra Chahal are rested for this game.

Also Bhuvaneshwar Kumar, Kuldeep Yadav and Krunal Pandya are also missing this game. The players replacing them are Nitish Rana, Rahul Chahar, Chetan Sakariya, K Gowtham and Sanju Samson. All of them are making their debut in this game. The sixth change is fast bowler Navdeep Saini.

The teams for today are :

At the toss a funny moment happened. Both the captains were out for the toss and the Lankan captain Shanaka flipped the coin. But it was Indian captain Shikhar Dhawan who won the toss. Instantly he did something funny. He celebrated the victory of toss by slapping his thigh and then pointed his finger up like he has gotten a wicket.

Normally Dhawan does that when he takes a catch. However this was the first time he did it after the toss. It was a funny moment and the video became viral quickly on the internet and social media. People gave a lot of reactions on it in their own understanding.

Also Hardik Pandya said that he is 100% fit and will carry on bowling without any issues. This is a great news for Indian fans.

Watch the video of Dhawan here: