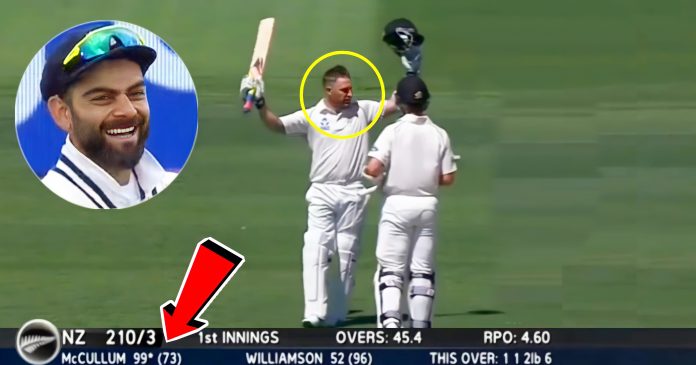 Brendon McCullum is one of the finest cricketer to have come out of New Zealand. The former captain of New Zealand was an attacking opening batsman. Also known as Bazz, his batting touched new heights when he quit wicket keeping in the 2010. Especially from the year 2013 to 2016, he was unstoppable as a batsman.

During the India’s tour of New Zealand in 2014, the right hander Mccullum became the first batsman from his country to reach 300. He hit a triple century of 559 balls as his marathon innings saved New Zealand from a certain defeat in the second test. That was a watershed year for McCullum as he hit a record 4 double centuries in the season.

In the following year in 2015, McCullum’s batting reached zenith in the 50 overs World Cup jointly hosted by New Zealand and Australia. As an opening batsman he blasted opposition bowlers into submission. Consequently New Zealand won a record 8 games consecutively to reach the Finals. Moreover his innings of 77 in just 25 balls in the league game and then a match winning 59 in 26 balls in the semi final lit up the tournament.

McCullum retired in the year 2016 but not before entertaining the crowd once more. He smashed a century in his final test in just 54 balls vs Australia. Unfortunately that assault wasn’t enough to stop the Kiwis from losing the match.

An entertainer for the crowd!

Post retirement from international cricket he continued to play in the IPL and other local T20 leagues. Now he works as a commentator and also as a coach for the Kolkata Knight Riders in the Indian Premier League.

Here we remember a funny incident when Mccullum got confused which led to a comical situation in the ground. It was a test match between Sri Lanka and New Zealand hosted by the latter. New Zealand was batting as the duo of Williamson and McCullum were at the crease together.

McCullum was batting on 93 when he came down the track and hoicked the bowler for a six over long off. Instantly he removed his helmet and raised his bat thinking he got his 100 as the crowd joined in too. However, the umpires intervened and reminded him that he is still on 99. It was both funny and confusing at the same time.

Finally he reached his 100 in the next over.

Watch : Ishan Kishan explains how he managed to hit six on the first...