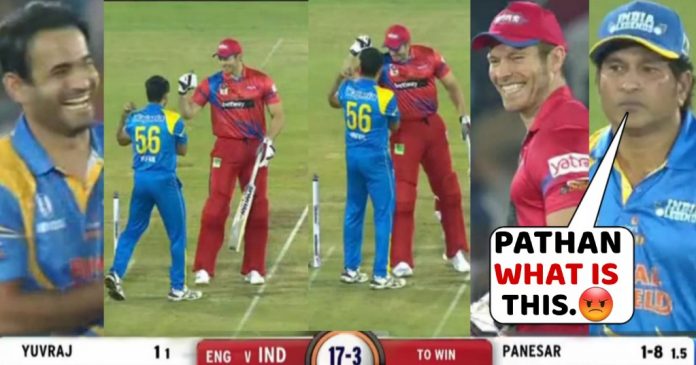 India legends and England legends are locking horns in a league game in the ongoing Road Safety League. The Indian captain Sachin Tendulkar won the toss and decided to bowl first. However, his decision did not proved to be a successful one. England legends skipper Kevin Peterson hit an 18 ball 50 on the way to score 75 off just 37 deliveries.

England in their allotted quota of 20 overs made 188-7 on the back of Peterson’s brilliant innings. For India, Yusuf Pathan was the pick of bowlers with figures of 3-0-28-3.

But amidst all these, a funny moment happened on the ground which left everyone in splits. The moment came when Chris Tremlett arrived on to the ground to bat at the fall of 6th English wicket in 18th over.

For India, Irfan Pathan came to bowl the 18th over. It is at this point of time when a comical incident happened between these two players. Irfan Pathan suddenly came in front of Tremlett with his sleeves rolled up to his biceps and asked the batsman Tremlett to compare his biceps with him!

Actually, Tremlett is a player who has a frame of 6’8. After his retirement from professional cricket, he tried to start his career in professional body building but could not succeed unfortunately. He left it soon but the bulk he generated on his body was still visible.

It is this extra flesh on his body which makes him look more like a rugby player rather than a cricket player. Additionally, his 6’8 tall frame does even more justice to his fleshy physique.

So when Irfan Pathan came to compare his biceps with Tremlett’s one, it was a one sided encounter. There was no comparison between the biceps of both as Tremlett won that contest hands down. More than anything, it was a just case of entertaining the people present in the ground, be it the fans or the players.

However, the camaraderie and the bonding between the two players was so good to see. Moreover, this funny act brought a smile on every one’s face who was present in the ground.

Watch the video of this funny incident here:

Watch: When Hardik Pandya Smashes 39 Runs in One Over in Syed Mushtaq Ali...