The Indian Premier League was postponed close to a month ago. A lot of former Indian cricketers were seen in the in the tournament. Moreover, their fans had the chance to see them again. After the retirements of these players from international cricket, they took the field only in IPL matches. However, since the competition was called off due to COVID, there is not much for the retired players to display. Hence, they are busy on social media sharing the pictures and videos of their routine life style.

Recently, the former Indian middle order batsman Suresh Raina posted an interesting video on his Instagram account. As everyone knows, the left arm batsman from Uttar Pradesh is a vital cog in the set up of Chennai Super Kings. His contributions in the victories of Chennai is too large and important. Hence, the fans of Chennai franchise fondly call him as “Chinna Thala”. The term Chinna Thala means the deputy leader as ‘Thala’ is the title of MS Dhoni. Assuming that Raina is second in command of Dhoni is itself a testimony to the importance that the southpaw enjoys in Chennai Super Kings team and with its fans.

Coming back to the video which was shared by Raina on his social media platform, it was a rather funny one. In the video, the explosive lefty can be seen doing a few dance moves and jigs on a popular Tamilian song “Vaathi Coming”. A song of Tamil films superstar Mr Vijay, it is quite a hit even in Northern part of India where hardly anyone understands Tamil language.

The dance video is actually a part of shooting for some advertisement related to Chennai Super Kings. Suresh Raina is wearing traditional clothes which the Tamil men wear and is dancing with few others boys as well as with children. A 30 seconds clip of the same was shared by Raina with the caption which said :

“Reminiscing some old shoot days! Hoping and praying for a brighter world very soon to get back on sets #BTS.”

With the IPL now confirmed to re start in UAE from the month of September, Raina will be again seen in the yellow jersey of Chennai. In the first leg of the tournament, the aggressive number 3 looked short of his best. In 7 matches, he scored 123 runs at an average of 24.6 and a strike rate of 127. That includes the lone half century of the season with 54 runs in 36 balls. Fans of Raina and Chennai would certainly want more from him when the tournament resumes in September. He is their celebrated “Chinna Thala” after all.

Watch the video of the dance here:

Watch : Emotional statement of Rashid Khan. Says he is hurt for this shocking reason 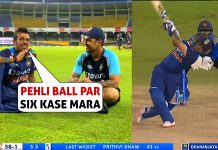 Watch : Ishan Kishan explains how he managed to hit six on the first ball of debut match in unbelievable style